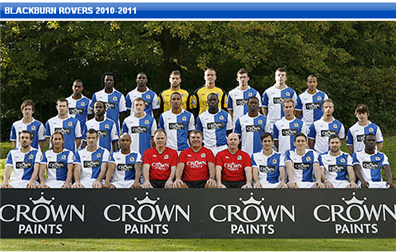 "We are very pleased to be passing on the Rovers to the Rao family," Paul Egerton-Vernon, chairman of Blackburn's trustees who completed the deal, said in a statement on the club website (www.rovers.co.uk).

"We have been very impressed with their enthusiasm for the club and their plans and ideas for future investment to develop it further."

The company's joint-managing director B Venkatesh Rao was in London to seal the deal, a company spokesman said.

Venky's have become the first Indian concern to own a Premier League side. Blackburn, formed in 1875, have been champions of England three times, the last occasion in 1995.

Venky's chief Anita J Desai ruled out tinkering with the club's existing management. "Going forward we plan to focus on leveraging the global influence in establishing Blackburn Rovers as a truly global brand.

"We...will be actively supporting the organisation to ensure that Blackburn Rovers remains one of the best run clubs within the Premier League," she said.

"We are particularly pleased that the deal has the full support of the Walker Trust, the chairman and the management team who will of course remain in place with our full support."

Sharing her optimism, Venky's director Balaji Rao added, "We see real sustainable growth for the club moving forward, both within the UK and also internationally and we intend to exploit our in-depth knowledge of the Indian market in particular, and beyond that, the whole of Asia. "Blackburn Rovers fans will be delighted to add to the family a huge Indian and Asian fan base."