The US Financial Crisis: Impact On The Indian IT Sector

The current US financial crisis has been variously compared with the 1907 banking/credit crisis, the Great Depression and the dotcom bust. It’s been quite a roller-coaster ride for the world economy with financial services dominating the headlines world over – companies writing down losses, companies merging, acquiring, and going bust. The latest saga including Lehman, Merrill and AIG has unnerved the financial world and created serious concerns among their business partners, especially the Indian IT players.

The current crisis parallels the 2001-2002 bust especially for India’s IT (export) sector. Approximately 61% of the Indian IT sector’s revenues are from US clients. If you just take the top five India players who account for 46% of the IT industry’s revenues, the revenue contribution from US clients is approximately 58%.  About 30% of the industry revenues are estimated to be from financial services. In addition, from a qualitative standpoint, the tentacles of the financial sector business are quite well-entrenched and have significant structural impact as well.

The size and maturity of the IT industry today are far ahead of the 2001 days, and the current model has signs of “irreversibility” and long-term competitive advantage. While GE invented the industry along with India’s biggest IT outsourcing firms, the US financial services and insurance sector (BFSI) was one of the earliest adopters of the outsourcing trend in a big way.

The US BFSI players created large outsourcing chunks, made Indian IT players learn from their experience, negotiated aggressively on pricing, pushed for service level commitments, and rewarded with more work to all who excelled in taking on their challenges. Between 1999 and 2008, the share of US financial services revenue as a % of total revenues for the Top 3 Indian players thus went up from 25% to 38%.

In the minds of the BFSI US players, Indian companies were flexible, delivered good quality (resources), and gave a key lever in managing their SG&A and time to market by freeing up more critical IT resources. They were essentially partners in taking some of the fixed costs out of their SG&A. Partnering in the operating business areas was still far away and is a tad far even today. It is ironic that this crisis would have had a worse impact, if Indian firms had partnered with the financial services entities much more closely, tying up their invoices with the clients’ business outcomes.

A recent study by Forrester reveals that 43% of Western companies are cutting back their IT spend and nearly 30 percent are scrutinizing IT projects for better returns. Some of this can lead to offshoring, but the impact of overall reduction in discretionary IT spends, including offshore work, cannot be denied. The slowing U.S. economy has seen 70 percent of firms negotiating lower rates with suppliers and nearly 60 percent are cutting back on contractors. With budgets squeezed, just over 40 percent of companies plan to increase their use of offshore vendors.

The US financial crisis puts a question mark on growth for Indian IT in the short-to-medium-term.  At the time of Q1 results, we saw growth numbers that were revised down by 2-3% after sentiment started building up against the US financial sector. A worse downward revision is expected this quarter as well, though some larger players like TCS and Satyam have officially denied any possible impact on growth. Going by Infy numbers, a gloomy forecast can be expected.

However, there are some offsetting factors softening the revenue slowdown - favorable Rupee-Dollar exchange rate, growth de-risking through Europe, growth in non-financial verticals, and growth through countercyclical new business (countercyclical to US slowdown). There may still be some hope of revenue growth from new avenues, albeit resulting from the current crisis.

Merger activity is going to provide new outsourcing opportunities(as Infy confirmed), as newly-merged entities may have to look at additional or new providers to support the integration work and a broader global presence - especially when you take into account the huge size of combined international operations. In addition to the M&A activity, financial institutions will be looking to reduce their SG&A costs quickly, which will opt for outsourced solutions that impact the bottom-line - i.e. F&A BPO and some ITO and possibly some HRO deals, where there is quick remediation of staff. 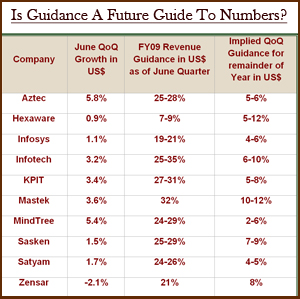 A quick look at some numbers - taking the Q1 guidance numbers in Dollar terms and the FY09 guidance provided post the Q1 results, we can arrive at the implied QoQ growth for the next 3 quarters required to achieve these numbers. The numbers as given in the table seem quite high, especially if seen with the lens of the current crisis. Hence, growth projections are tough to do in the current situation. However, the depreciating Rupee gives them additional Rupee growth to hit the numbers, assuming lower hedging.

It is very difficult to replace fixed costs with variable costs at short notice of say a month. Hence, the focus will have to move to across-the-board fixed cost-cutting since making the costs esp. overheads and support costs variable at short notice is impossible.

Pricing has been difficult in this sector compared to other sectors: On an average, the US financial sector has driven bulk volumes through lower onsite pricing, higher offshoring and aggressive volume discounts. It is safe to infer that BFSI application business margins especially in the top companies are a few percentage points below the higher margin verticals like, say, energy. Hence, a replacement of financial services business with business from other verticals is likely to positively impact the bottom-line.  A speedy replacement is however, easier said than done.

Exchange Rate: The Rupee-Dollar exchange rate benefit for a company that would have done zero-hedging, is in the range of 10-12%. However, if we analyze the top few firms, the median seems to be around an offset benefit of around 2-3% on the bottom-line, assuming some hedging.

The Rupee has depreciated since the last quarter by more than 10% which has had a positive effect on both top line and the bottom-line in Rupee terms.

This is to an extent countered by the significant hedging done by the IT biggies, the ramifications of which translated into forex losses for them in the June quarter. This may bite them again this quarter. For example, TCS has hedged about US$ 2.2 billion for the year at Rs.45/US$. According to the June quarter results transcript, at Rs.45/US$, the mark-to-market loss on this would be about US$100 million. And, considering the Rupee has moved beyond Rs.47/US$ into the first week of October, this can be far worse.

There is also another issue with this currency pantomime facing firms like Infosys, which derives 28% of its revenues from the Euro, British Pound and Australian Dollar. The US$ has also been appreciating against these currencies. These earnings translated into US$ will have a negative 2% impact on the company’s numbers. Taking these factors in to consideration, the currency depreciation does not paint as rosy a picture as we can imagine.

•    Wages are stabilizing and overall will have a positive impact on profitability due to lower attrition and hence lower recruitment costs. Wages as a % of top line also go down due to depreciation and labor market conditions. Similarly, pushing higher variability into wages can bring more benefits. And so will managing bench more aggressively and employee performance management programs.

•    Efficiencies – Indian IT companies continue to be made of the same DNA as during the dotcom days, and measures to shore up efficiencies are already underway since we saw the exchange rate hit 39 to the Dollar. Some of those gains are permanent since the processes have not been rolled back after the Rupee started depreciating. Potential measures are voluntary salary cuts, complete moratorium on salary raises, travel reduction, tightening of promotion spends, just-in-time hiring, hire-after-contract, etc. 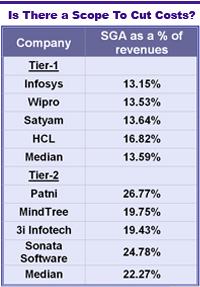 •    G&A levers like payables, facilities costs, transportation and some of the internal IT spends can aid more cost efficiencies. Relooking at the Selling, General & Administration (SG&A) expenses, with a view to be conservative would help, especially the second Tier IT firms. There is a difference of about 10% between the SG&A of the top firms and the mid-level ones. Some conscious pruning on this front will only aid the bottom-line to move upwards (hard because of lack of economies of scale, but some aspects like making costs more variable and postponing some of the support and operational spending, are achievable).

While we have looked mainly at IT, the ITES sector is joined at the hip with IT industry, but with its own flavors. The impact in financial services operations will be much larger, but, over the medium to long term, there will be a huge gain for them from the increase in outsourcing and offshoring in the financial sector. However, short-term pain alongside the US slowdown is inevitable.

Conclusion and Opportunities for India’s IT Sector

While there are growth-related challenges in the short-to-medium term, there seem to be some opportunities for managing the bottom-line for the rest of the year. The macroeconomic environment is depressing and has impacted the overall confidence in the sector from a market perspective. A US recession has not started but if it does, in all probability, it will last through 2009 and more, making this period a challenging one for growth.

Despite the foreboding current financial crisis, the opportunities are:

•    Make the growth vs. profitability tradeoff early on during the slowdown (which is now). Profitability levers are still available if growth is sacrificed where required, and managed well.

•    Utilize some of the unavoidable fixed costs for implementing investment ideas that have been on the backburner and could not be kicked off due to high utilization.

1. Financial sector companies: Distressed assets in the mortgage and other financial services              industry are available to be picked up by Indian cos – the assets are laden with debt and a            lack of good forecasts on future business.

2.  IT companies to look for IP and product related investments especially in the US

•    Focus on operational efficiencies – efficiencies that can help shore up the bottom line especially in an attractive labor market and an environment of budget/spend uncertainty.

All in all, the environment looks weakest in a long while, and yet there remain pockets of opportunity. These areas, if tapped intelligently, would enable the IT firms to ease the blow of this financial crisis and help them tide through the tough times. The crisis has now spread globally, and further reduces room to maneuver.