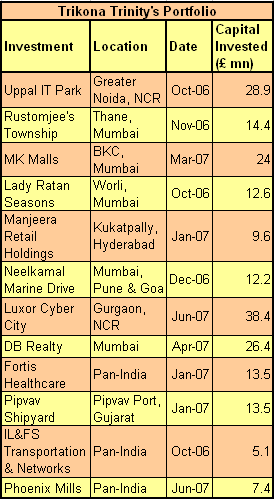 In a first for Indian private equity funds, Trikona Trinity Capital PLC, the AIM listed real estate fund focused on India, has sacked its Indian advisor Trikona Advisors Ltd. Trikona Trinity has terminated the portfolio management agreement with the advisors due to "the breaches" of the terms of the Portfolio Management Agreement," the firm said in a statement to London Stock Exchange.

Trikona Trinity is also looking at other private equity fund managers to take over the running and operations of its existing portfolio assets, which is about worth £250 million.

The exact nature of breaches could not be ascertained. When contacted by VCCircle, Ashish Kalra, Managing Partner of Trikona Capital, said he could not comment immediately, adding he was still in talks with their lawyers.

Trikona Advisors plans to come out with a statement later today.

What is significant is Trikona Trinity is also looking to appoint new advisers in Mumbai and Delhi to assist in administering, monitoring and protecting the company's investments in India. Trikona Trinity was listed on AIM in April 2006 and had raised £250 million to invest in Indian real estate sector.

This is not the first time that Trikona has run into trouble with its shareholers. Earlier this year  investors in the real estate fund demanded its dispose off all its assets. The investors, led by hedge fund QVT, said Trikona's ability to conduct business had been

Trikona Trinity is also seeking, through its subsidiaries and investee companies, the immediate termination of all contracts in India with companies related to Trikona Advisors and its shareholders. It is also evaluating the claims that it might have against Trikona regarding the breaches.

The London based fund has also announced the appointment of Arvind Pahwa, formerly the head of Indian Real Estate for JP Morgan Asset Management as a non-executive director.