Structural reform is the way ahead

With the Narendra Modi government all set to roll out its third budget on February 29, it is being questioned on the possible measures that carry the potential to make or break its efforts to put forth a powerful budget. What is the biggest challenge that awaits the NDA government vis-a-vis the Budget 2016-17? It’s reviving growth without putting into risk the macroeconomic stability.

Although India's macro stability parameters such as the current account deficit, inflation and fiscal deficit are under control, there are still some aspects that pose challenges; two major components that contribute to demand growth–exports and private investment--have been weak; troubled global economy has led to anaemic global economic growth resulting into downbeat financial health of companies and banks; the pressure to stick to the fiscal deficit target has made large-scale public investments challenging.

A sharp and continuing decline in nominal GDP growth, with the growth projection for 2015-16 between 7 per cent and 7.5 per cent, has been a cause of concern. The economy has been driven majorly by private consumption, given the falling oil and other commodity prices, and government investment in the first half of 2015-16.

The other two components that contribute to the aggregate demand growth--exports and private investment--have been weak. This has got the government thinking over relaxing the fiscal deficit target, which is 3.5 per cent of GDP as per the FRBM targets, set only last year for the fiscal 2016-17.

What if the government exceeds its fiscal deficit target?

1) It can jeopardize macroeconomic stability.

Our consolidated fiscal deficit of both the centre and the state, as against many countries we are compared with, is by far the largest, let alone Brazil, which itself is going through a rough phase. The consolidated fiscal deficit increased from 7 per cent of GDP in 2014 to 7.2 per cent of GDP in 2015. With schemes like Ujwal Discom Assurance Yojana (UDAY), designed to breathe life into state power distribution companies, being implemented in the next fiscal, the expenditure of the state governments is bound to increase. Also, the recommendation of the 7th Pay Commission to increase the pay and pension of government employees will put pressure on government finances, further increasing the fiscal deficit.

Exceeding the fiscal deficit target would lead to higher bond yields. More quantity of government bonds, which would have to be financed for meeting the deficit as well as the requirements of UDAY and possible loss of the government credibility by exceeding the fiscal deficit target of 3.5 per cent of GDP, which was set only last year, would drive bond yields higher.

Increasing the public expenditure to revive growth would hold good only if GDP growth exceeds the government's cost of borrowing, which is measured by the rate of 10-year government securities. The difference between the G-Sec yield and the nominal GDP has turned out positive since the middle of the year 2015 and is now close to 2 per cent due to falling nominal GDP growth. The increased government spending has not been able to increase GDP growth in a way that outweighs the cost of borrowing, making the debt dynamics unfavourable.

Note: These are real GDP figures in per cent. Nominal GDP is GDP at current prices and is calculated as a sum of real GDP and GDP deflator.

The RBI governor, in the central bank's sixth bi-monthly monetary policy review, kept the repo rate at 6.75 per cent and CRR at 4 per cent. The governor made it clear that if the government is able to introduce enough structural reforms that help in boosting growth and controlling the government expenditure, it would give the RBI room for lowering the interest rates; bringing in cheap money to further support growth.

Government expenditure should be planned in a way such that it compliments private investment. The government and private investment should not compete for the same slice of the market. Government expenditure should be directed towards improving the productivity of farming and allied activities and other sectors where private sector investment is limited. In sectors where private investment exists, the government should restrict its role to being a facilitator. Weak demand and stressed corporate balance sheets due to increased indebtedness led to corporate capital expenditure as a share of GDP falling from 5.4 per cent in 2014 to 5.2 per cent in 2015.

Performance snapshot for nine months from April 2015 through December 2015 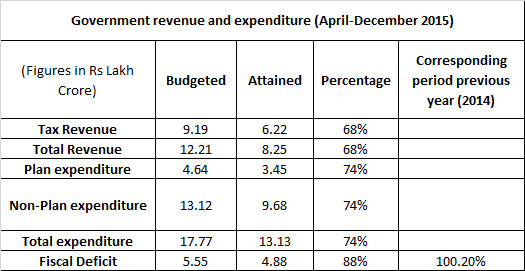 The government has been grappling with the pressure of achieving its fiscal deficit target of 3.5 per cent for 2016-17 (3 per cent for 2017-18) given the decline in nominal GDP growth, which stands at 8.6 per cent as against the budget assumption of 11.5 per cent. Although there has been an improvement in the quality of government expenditure, with a shift from revenue to capital expenditure and there being a room for 12 per cent more expenditure that the government can incur, there are still many things that act as impediments in its way to achieving its fiscal deficit target.

Challenges in the path to fiscal consolidation

- Weak private investment given the downbeat demand and poor performance of corporations.

- Shortfall in the divestment receipts given the adverse market conditions for a portfolio comprising largely of the commodity stocks.

- Weak financial health of state-run banks that necessitate the need for their recapitalization.

- The recommendations of the 7th Pay Commission, which are expected to add an additional 0.65 per cent of GDP to the expenditure; additional pension obligations may also be incurred.

Silver lining with regards to meeting the fiscal deficit target

2) Increased excise duty on petroleum products: Falling crude prices reduced the subsidy burden and also prompted the government to increase excise duty on automobile fuels (both petrol and diesel) significantly over the past one-and-a-half years. This helped in adding to the government revenues in the fiscal 2015-16 and would continue to do so in 2016-17 provided oil prices remain low.

Rising NPAs in banks: This requires a focus on refinancing or recapitalisation to release capital. Many state-run banks incurred net losses or a sharp decline in their bottom lines in the third quarter of 2015-16 on account of increase in provisioning for the increased bad loans. Many of them would be witnessing increased bad loans for the coming quarter as well, which will certainly hit their profitability. The RBI governor has set a deadline of March 2017 for the banks to clean up their balance sheets and make provisions for bad loans by the end of this March. What is the intention? Certainly to help banks improve their deteriorating health and increase their lending capacity thereby boosting economic growth.

How is the government planning to clean up the mess?

1) The capital requirements of the banks to be met by the government through schemes like Indradhanush, under which it plans to inject Rs 70,000 crore. However, banks would have to raise additional money from the market to meet their capital requirements in line with the global Basel III risk norms.

With the NDA lacking majority in the Raja Sabha, it failed in its efforts to get the opposition on board with regard to it in the winter session of parliament that ended in December. Having missed the original timeline of April 1, 2016 for its implementation, the government will now have to do way too much to speed up the process of its implementation.

Some concrete steps towards its implementation such as aligning the service tax rates with the proposed GST rates, rationalising exemptions that are available under service tax in line with minimal proposed exemptions under GST etc. would have to be undertaken.

What should be the key focus areas?

- Public spending that leads to infrastructure development and job creation. A total of 304 projects involving an investment of close to Rs 13 lakh crore remain stalled with the Project Management Group as on February 1, 2016. This is close to 33 per cent lower than the figure released in March 2015. However, the new projects keep adding to the list of stalled projects. We'll have to wait and see how much the government is able to deliver with respect to it.

- Committing to a reasonable divestment target and reviving sick PSUs.

Let's hope the government is not bogged down by political compulsions and delivers a growth-targeting reformist budget instead of a populist one.