So Why are Indian Corporates Selling Out?

It was a very genuine question during one of the M&A negotiations by an overseas acquirer keen to buy the stake of an Indian promoter. If India is on a high once again with the growth back to over 9% and the long term growth prospects look even more robust for the economy and business; If all global companies have India on their radar for future growth; Why are the Indian promoters selling despite the fact that they see considerable growth opportunities in their business.

Is this just the colour of money? The money earned by the promoters of Ranbaxy, Piramal Healthcare, Indo Asian, and Paras Healthcare  when they sold their businesses at unprecedented astronomical valuations would probably be exciting for anyone. But is it just the money or there is there more to the changing business dynamics?

Most Indian promoters are basically entrepreneurial in nature. They are very good at building new businesses. However, at the same time many of them are not so good at scaling the businesses to the next level once it reaches a critical mass. The last 10 - 15 years of growth in India has provided a great opportunity to the Indian entrepreneurs to scale up businesses. However, now the Indian promoters are facing the challenge of scaling up businesses to the next orbit due to various reasons:

• Financial constraints: The scale up to the next level requires considerable investment.

• Managerial challenge: The growth to a certain level is feasible with the family run business approach. But beyond a size, the promoter manager starts losing control and needs to professionalize the business. This is a challenge both from the perspective of availability to managerial talent and also the conflict in the management styles and philosophies of the entrepreneur and the manager

• Age: A number of promoters have reached an age where they feel they do not have a the same energy to compete in a tough environment to grow the business to a next level

A number of businesses are now reaching their 3rd generation. They were being run by the father and his sons/ daughters as a close family unit. However, with the coming in of 3rd generation with different ideas and perspective, it may be difficult to run the business as a close run family with similar ideology. In such a scenario it may be easier to divide the money than divide the business.

Till the last decade a number of foreign companies were not so focused on India and were happy to enter into JVs, technical collaborations with Indian entrepreneurs. However, with the focus shifting to India and China over the last few years, a number of foreign companies are keen to enter Indian on their own to capitalize on the growth opportunity. This is posing a difficult challenge to the Indian entrepreneur who was so far competing with other Indian companies with "home-grown" marketing and competitive strategies. Competing with MNCs with their deep pocket and long term business outlook is a different ball game.

Consolidation in the industry

The entry of MNCs has also forced a consolidation in several industries which were so far very fragmented. The promoters were content with enjoying a strong position in a region since very few had the bandwidth to scale even to a complete national level. With the consolidation (and now even the focus on globalization which has in fact made Indian industry more interlinked to global business), the companies which are not the leaders are facing the challenge.

"Get out when the going is good"

The Indian promoters never had it so good. 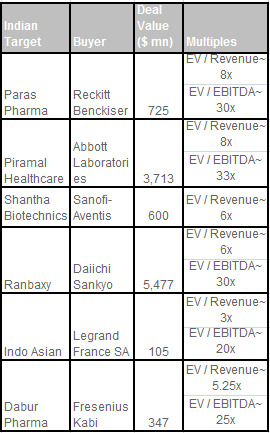 With the focus on MNCs in India and the high valuations, the exit opportunity had never been so lucrative for Indian entrepreneur who has worked hard for the last few decades to come to a level where it is time to reap the fruit of the hard work put in.

So will the Indian entrepreneur lose out?

I do not feel so. It is a win - win situation for both the Indian entrepreneur and the Global MNCs. The MNCs get an established base to grow their business in a fast growing economy. And the Indian promoter, being an entrepreneur, has several ideas (and now the money) to grow new businesses to capitalize on the tremendous opportunity which India provides today. So while the Singh brothers are focusing their efforts and the money to build the financial services and healthcare business, the Piramal group is looking to grow their OTC business to a new level.

Frankly, the healthcare and OTC business probably today provide a larger growth opportunity in India than the Pharma business which is becoming more competitive with the entry of MNCs and changing business dynamics. And with the bonanza from the sale, their ambitions may not stop at Indian border.