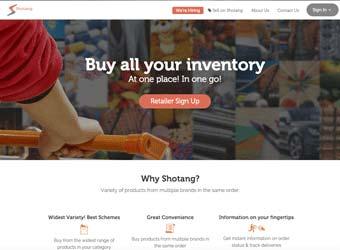 The company will utilise the funds to grow its team, expand into the top 10 cities and to strengthen its core technology infrastructure over the next one year, it said in a statement.

Shotang is an on-cloud marketplace that enables retailers, distributors and manufacturers to discover, transact and manage their businesses online via an app-based platform.

Shotang was founded by Anish Basu Roy and Anterpreet Singh in 2013. Roy has been associated with Nokia and Coco-Cola while Singh, an IIM-Ahmedabad graduate, worked with Nokia before launching Shotang.

The company currently has presence in two metros and claims to have over 3000 retailers transacting every week on the platform.

“We believe we are poised to lend disruptive growth and efficiency to the traditional distribution channels, which comprises 15 million retailers, over 100 thousand distributors and nearly 20,000 manufacturers,” Singh said.

It had raised an undisclosed amount in seed funding about a year back from Bitchemy Ventures.

Venture capital fund Exfinity Venture Partners was formed by IT industry veterans TV Mohandas Pai, Balakrishnan V, Girish Paranjpe and Deepak Ghaisas. The firm has raised Rs 125 crore from around 70 investors for its first fund and invested in about six companies. In an earlier interaction, Balakrishnan told VCCircle that Exfinity would look at investing in Series A, B and C rounds from its upcoming bigger second fund.

Last month, Techcircle.in had reported that billionaire investor Rakesh Jhunjhunwala, who made his fortune through stock bets, has taken a step towards investing in tech startups by joining as a limited partner of the Rs 250 crore second fund being raised by Exfinity Venture Partners.

A part of Unitus Capital, Unitus Impact Livelihoods Fund was founded in 2011 to identify new opportunities to accelerate economic self-empowerment in innovative ways.

In the B2B e-commerce space, online marketplace for industrial goods Industrybuying.com has recently received an undisclosed amount in angel funding from family members of the Chennai-based Murugappa and TVS groups. In September, it had secured Rs 60 crore ($9 million) in a Series B funding round from Kalaari Capital, existing investor SAIF Partners and Teruhide Sato’s Beenext. It had raised $2 million from SAIF Partners in February.

Another venture in this space is Tolexo.com. Run by Tolexo Online Pvt Ltd, Tolexo is part of IndiaMART InterMESH Ltd, which runs an online B2B platform for small and medium businesses connecting global buyers with suppliers under the brand IndiaMART. IndiaMART plans to invest Rs 100 crore in Tolexo for its brand building and business operations by March 2016. In April, VCCircle had reported that Tolexo was in talks to raise as much as $200 million from investors.