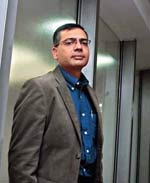 In what is going to be one of the biggest venture capital exits in India, the country's leading online travel company MakeMyTrip Ltd has filed on Monday with U.S. capital market regulators for an IPO. The company plans to raise up to $100 million in the share sale which will be be listed in Nasdaq under the symbol MMYT.

Morgan Stanley, Oppenheimer and Pacific Crest Securities are the underwriters of the IPO.

Gurgaon based MakeMyTrip has raised over $40 million in four rounds of venture capital funding. SAIF Partners is the primary backer followed by Sierra Ventures, Helion Venture Partners and Tiger Global.

One source said that MakeMytrip could go for a listing by middle of August. The company could expect a pre-money market capitalisation of around $400 million, added the source.

In December 2007, the company had raised $13 million from SAIF Partners, Sierra and Helion in series B and in 2005, SAIF Partners made the first major round of fund infusion of $10 million. That was the time MMT started its India operations. MMT, which had raised $1 million from eVentures, had till then focused on the travel between US and India route.

MakeMyTrip, founded in 2000, is India's largest travel portal with presence in online airline ticketing, holiday packages and in bus and rail travel ticketing. The company claims to have about 50% market share in the business.

Online travel space had heated up after the company launched its India operations in 2005. The major players that were launched in Indian market included Yatra.com, backed by Norwest venture Partners, Reliance Technology Ventures and TV18 Group; Cleartrip.com, backed by Sherpalo Ventures and Kleiner Perkins Caufield  & Byers; and Sequoia Capital and Battery Ventures backed Travelguru.com, which was later acquired by Travelocity.

Bangalore based Via, backed by NEA IndoUS and Sequoia Capital, is another leading player in the business.

For SAIF Partners, this would be the third proposed IPO from its portfolio. Local information company Just Dial is in the process of filing draft red herring prospectus with Indian regulator SEBI, while mobile VAS firm One97 Communications, in which SAIF holds around 40% stake, has already filed for its IPO.

SAIF-backed Speciality Restaurants, which owns restaurant chains Mainland China and Oh!Calcutta, is also reportedly looking for an IPO. The PE firm also recently exited IT services firm Intelligroup, which was acquired by NTT Data for $200 million, making 5x returns on its investment.