I hear these two terms – risk and volatility – all day long, almost always interchangeably. They sound like the same thing, but the truth is although they are related terms, conceptually they can be quite different. A lot of this misconception stems from the fact that traders are the most visible(ab)users of these terms and, in their specific case, in their defence, these two are almost the same thing. But if one were to take a broader view, they can represent very different things.

Fluctuations in stock prices, movements in generally accepted valuation multiples in the PE/VC market, the first 10 days price performance of an eagerly awaited IPO, box office collections, bitcoin value, commodity prices (well – counting out the cartel effect) – these are all volatile time series, subject to market perceptions and dynamics at that point in time. And these dynamics can be effected by considerations as diverse as market liquidity, impending elections, regulatory changes, date of movie release etc. These are realities of the business environment we live in today, and cannot be wished away. Benjamin Graham’s Mr. Market caricature is, in my opinion, the definitive explanation on this, so I won’t attempt to improve on it. Suffice it to say, price movements leading to volatility can often be irrational and governed by extreme fear/greed, and it is up to an investor to choose to accept these market signals and act on them, or to sit it out with the conviction that these fluctuations are short-term in nature, and his long-term investment thesis is intact. Provided he has that time horizon and patience for this, which brings us to risk.

This is where the issue gets a bit hairy. Risk is relative, unlike volatility. To paraphrase one of my favourite movie quotes “Volatility is real, risk is a state of mind”. That’s a slightly dramatic way of putting it, but the idea is true. To my mind (and this is a variant of the generally accepted interpretation – refer Risk, Value at Risk), risk, in the context of investing, means the probability of an investment substantially deviating from the original investment thesis. This is important, and if one accepts this definition, then risk is highly subjective. Given Mr. Market’s unpredictable movements, what you may consider risk, I may not. There are at least 4 large factors that go into shaping one’s perception of risk:

Risk reward appetite is very broad brush term, but essentially boils down to the return expectation and tolerance for loss. Investors who have a large appetite for risk typically demand higher returns as well, and vice versa. Angel investors fall into this category and are typically high risk-reward type investors. For a majority of them, an investment that fails to gain traction in the market is not a risk, it is a way of life, and is part of their expectation in this investment activity. It is so commonly understood a phenomenon that there is even a thumb rule on this. Nobody likes losing money, but a typical angel investor understands that many of his investments will come to naught and, hence, builds this expectation into his investment model. Once an eventuality has been accounted for, and is priced into the investment model, it ceases to be a risk. Breaking this down further:

As an example, a social/impact fund might have a very different return expectation than that of a true blue VC fund. If tomorrow the low cost medical device space were to suddenly fall out of favour with the VC investor community, I hardly think this would impact the Bill Gates foundation’s philosophy towards investing in the space.

b. Tolerance for loss

A person managing third party money from LPs will typically have a lower tolerance for losses than, say, an HNI who is dabbling in angel investing with personal surplus money.

a. This is often left out in the discussion, but is probably one of the most important factors in determining risk. I’ll leave it to the below chart (albeit a simplistic representation) to explain how, based on this one variable alone, risk and volatility are two very different beasts: 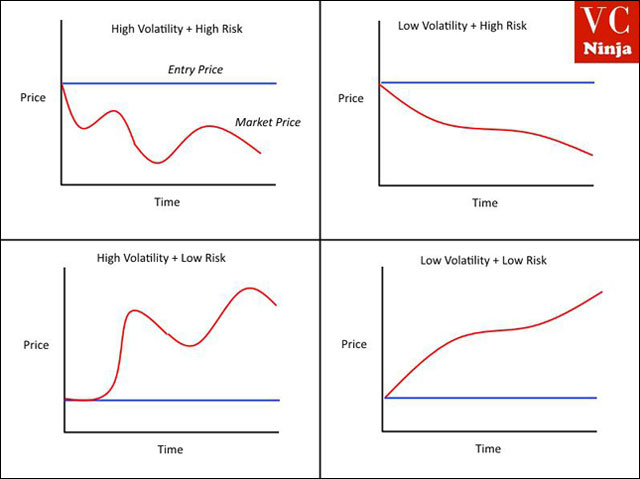 This is basically what differentiates a Warren Buffet from many other investors in the market. His single biggest weapon (of many, I must add) is the availability of float from his flagship company, which is essentially a rolling pool of money with no immediate redemption pressure. Therefore he is able to deploy money with a very long time horizon, plus maintain a healthy cash position at all times, thereby helping him to move fast and move big when a large attractive opportunity presents itself. All this would be less practical if he were working within a conventional fund structure. The point being, he invests with the objective of staying invested. With that kind of investment horizon, is it really surprising that a short-term market volatility does not represent “risk” to him?

4. Risk of NOT doing the investment/ strategic considerations

Some investments are made purely from the point of view of “If I don’t do it, someone else will, and gain an edge over me”. Such risks are perceived typically around scarce assets with several suitors. Pricing tends to be irrational in such cases, because no price is high enough for an asset you believe is essential to protect your future. Several recent transactions fit into this category – the most prominent example being Facebook’s acquisition of Whatsapp.

In summary, as an investor, be mindful of the difference. Risk being relative makes investing so much more interesting because it now effectively is no longer a strictly zero-sum game. A transaction is not just “an asset at a price”; it actually is “an asset at a price, with a perceived risk attached to it”. So, a single transaction can be win-win if both sides of the trade view the risks involved as different, price a security/asset differently, and therefore both walk away with the belief they have acted to create value for themselves.