RBI does what a central bank should do

RBI does what a central bank should do. The RBI balanced its anti-inflationary stance against the need to support growth with its tactical policy easing through only a CRR cut of 25 bps. The RBI’s decision also takes into cognizance the growth-inflation dynamics as also the Government’s policy measures. We continue to expect further easing of 50 bps in repo rate in 4QFY13 and 25 bps in CRR in rest of FY2013 contingent on the inflation trajectory peaking out in December. Risks to our call would be from (1) winter session of parliament, (2) inflation momentum (especially from demand-side) and (3) FY2014

Belying expectations of some sections of the market, the RBI kept the repo rate unchanged at 8%. The CRR cut of 25 bps to 4.25% of NDTL, effective November 3, is likely to lead to a primary liquidity injection of ~Rs175 bn. The RBI asserts that the move was pre-emptive, aiming at prospective liquidity tightening owing to (1) continued wedge between the credit and deposit growth, (2) higher currency in circulation due to advent of festive season and (3) build-up of Government cash balances since mid-September. The RBI has tactically chosen the CRR route to complement the Government’s actions—without deviating from the anti-inflationary stance.

Even as a CRR cut is effective in managing liquidity to ensure credit flows to productive sectors and lower the funding costs of the banks, at the present juncture it also helps in pushing up reserve money growth. The onus of reserve money creation rests on domestic sources of LAF and OMO and now also on CRR given that RBI’s net foreign exchange assets are growing at 5.4% in FYTD13 against 17.2% for the same period last year. The CRR cut would lead to a higher money multiplier and in turn higher money supply growth. In effect, CRR has now been opened up as a liquidity management tool, away from being used as only a monetary policy tool. However, RBI will remain mindful that “excess liquidity could aggravate inflation risks” and would aim keeping the operative policy rate towards the upper end of the policy rate corridor.

We have been consistently highlighting that the RBI is unlikely to shift from its anti-inflationary stance till inflation peaks out. The risks arising out from the twin deficit problem and inflationary pressures from the Government’s expenditure mix has kept us wary of expecting any rate cuts. We expect December inflation to peak at ~8.5% and come down to ~7.5% in March. This falling trajectory provides the RBI with an opportunity to implement “further policy easing” in 4QFY13 depending on the growth-inflation dynamics. We expect the RBI to ease repo rates by 50 bps in 4QFY13 based on our estimates of growth-inflation and CRR by 25 bps in the remaining of

FY2013 (dependant on developments on liquidity). The RBI lowered its FY2013 growth estimate to 5.8% and raised its inflation estimate to 7.5%.

We do not expect any policy action from the RBI in the next meeting on December 18. However, our call for repo rate easing in 4QFY13 has the following risks: (1) the winter session of the parliament can complicate policy dynamics in absence of legislative measures, (2) inflation momentum remaining unexpectedly high especially from the demand-side and (3) any easing in March may be restricted in case the FY2014 Union Budget does not adhere to principles of fiscal consolidation (shift in quality of expenditure and control of subsidies). 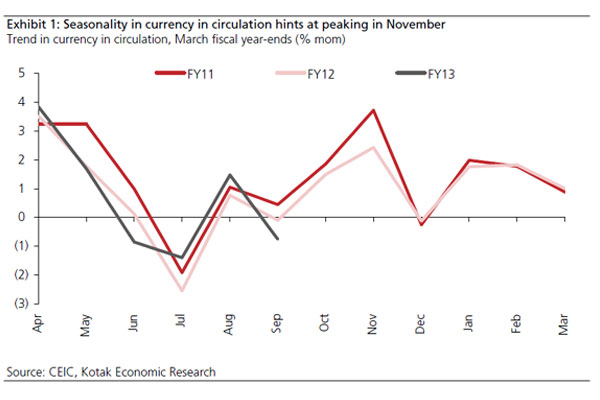 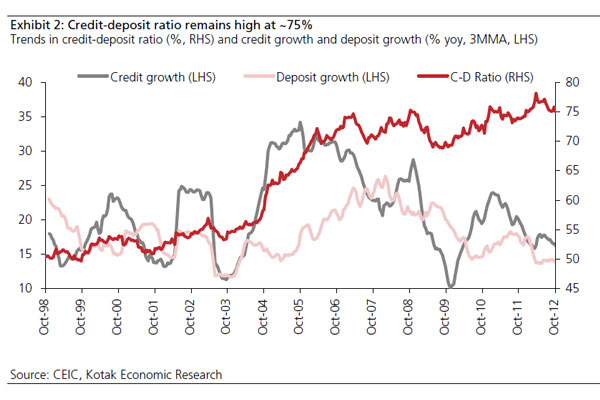