The Reserve Bank of India (RBI) continues to spring surprises. In today's policy announcement, the headline policy rate - the repo rate - was kept unchanged. While the RBI's decision was a close call, it was against our expectation of a 25bp cut, though broadly in line with the market consensus (31 out of 34 respondents to a Bloomberg survey expected no change). The bigger surprise came in the form of a 100bp cut in banks' statutory liquidity ratio (SLR) requirements, which was reduced to 23% of their net demand and time liabilities (NDTL).

SLR cut not effective in near-term

This reduction in the SLR, in principle, increases banks' resources that are lendable to the private sector by ~INR650bn through reducing statutory pre-emption. In reality, whether such an increase in lendable resources translates into higher lending depends on a host of other factors. Currently, the banking system is holding excess SLR equivalent to more than 4% of NDTL (over INR2.5trn). Given subdued business confidence, weak capex and poor risk appetite, an immediate uptick in banks' credit disbursals appears unlikely. In short, while this latest move can be seen as a long-term positive, the immediate impact on bank credit will likely be very limited. Moreover, the potential signalling effect from a cut in the repo rate or in the cash reserve ratio (CRR) remains absent. If banks were indeed constrained on liquidity to lend, they would have probably used their existing excess SLR to borrow from the RBI and cater to commercial credit.

Of late, the RBI has repeatedly indicated its reluctance to use headline monetary policy tools such as repo rate or CRR cuts given stubbornly high inflation. However, given the wide-spread weakness in the economy, internally we think the RBI is struggling with a far bigger policy dilemma than is suggested by its public statements. Some of the bank's recent actions would seem to support this view. For example, despite the absence of 'headline easing' the RBI continues with what we think could be called a policy of indirect easing - relaxing export credit refinance rules in June, followed by today's SLR cut. 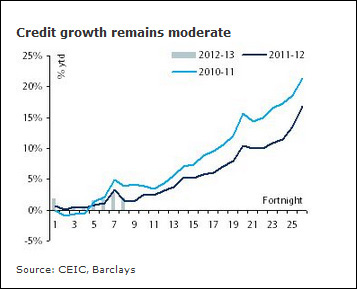 We still expect a further 100bp of repo rate cuts, but may be backloaded

The Indian central bank suggests that inflation management is likely to remain its focus in the near term, unless its assumptions change dramatically. However, markedly sub-par growth, a softening in core inflationary pressures, near-zero fiscal spending headroom, and likely only hesitant government policy initiatives to revive the economy will underscore the need for greater monetary accommodation in coming months, in our view. We maintain our expectation of a further 100bp of repo rate cuts in FY 12-13. However, we think the risk of the cuts being more backloaded towards the end of the fiscal year has increased considerably after today's announcement.

The RBI has downgraded its GDP growth projection to 6.5% from 7% for FY12-13, while raising its inflation forecast from 6.5% to 7.0% by March 2013. In terms of the trajectory, the central bank now expects inflation to rise over the next six months, possibly crossing 8%, before moderating to 7% by March 2013. We see this as an important change, as in the April policy review the central bank forecast 7% as the highest point for inflation in the current fiscal year. Clearly, the poor monsoon is likely to negatively impact inflation, and despite the lack of fuel subsidy rationalisation (and marginally lower commodity prices), the RBI expects inflation to remain above its comfort zone. What could change this outlook would be a sharp drop in commodity prices, but the RBI seems to be assigning a low probability to such an outcome.

Growth risks might be higher than the RBI thinks

Another interesting aspect of the RBI's assessment is the risks it attaches to its projections. The central bank cites external risks to the Indian economy as one risk that is intensifying, causing market volatility and perverse movements in capital flows. Apart from this area, it also sees weather and structural imbalances in the agriculture sector as creating upside risks to inflation. Finally, the central bank also notes that a failure to address the twin deficits (fiscal and external balance) remains a threat to economic stability. Interestingly, its emphasis on growth risks seems to be relatively less in today's release, compared with earlier statements. 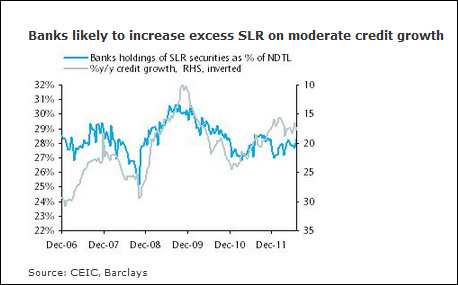 We also think it needs to be noted that the RBI's revised growth forecast of 6.5% could face further downside, reflecting the poor monsoon and delays in rate cuts. IIP growth in the April-June quarter will likely be near zero, in our view. This does not provide grounds for GDP growth to improve from the trough of 5.3% in the previous quarter. This year's poor monsoon will also keep the RBI worried about further upward pressures on inflation and inflation expectations. But, the commonly perceived straightjacket policy prescription of no/slower rate cuts in the case of monsoon failure is possibly an over-simplification in the case of the current year. Amid the marked weakness in exports and investment, consumption remains key for the economy. But the detrimental impact of a bad monsoon on consumption, and subsequently on overall growth, could be far greater this time than in the recent past (ie, FY 09-10). At that time, India enjoyed exceptionally easy monetary conditions, stronger global growth, lower commodity prices and considerably better domestic sentiment. In addition, the government managed to provide sizeable fiscal support, especially to rural India (through rural employment support, higher support prices for crops, salary hikes in the government sector, cuts in excise and service tax rates, etc). A slippage in consumption demand due to a bad monsoon could, therefore, result in sizeable downside risks to the already weak growth scenario.

In its policy stance section, the RBI stated "...Liquidity conditions play an important role in the transmission of monetary policy signals. Although the situation has eased significantly in the recent period, it is necessary to ensure that liquidity pressures do not constrain the flow of credit to the productive sectors of the economy". This is very much in line with our view that the RBI's preference is for easier liquidity conditions going forward and that the call rate will likely drift 15-40bp below the repo rate in the medium term. For details, please see EM Asia Rates Strategy: India - Position for a possible shift in liquidity: receive rates, buy bonds, 15 June 2012.

The cut in the SLR rate does not constitute an injection of base money, ie, it is not an injection of primary liquidity. To that extent, we do not think that the SLR cut is likely to impact the banking system liquidity deficit in any meaningful way. The impact of the SLR cut on the call fixing versus repo rate spread will also likely be minimal - about 5-7bp, in our view. While the SLR cut is also unlikely to impact the total LAF borrowing (as the systemic liquidity deficit is unchanged), it should help to reduce interbank borrowing rates. This is because banks previously borrowing in the interbank call market due to lack of excess SLR may now borrow from the RBI at the repo rate. We think this means that the impact of skew on excess SLR will likely lessen, resulting in the call rate dropping further. We estimate this drop will only be about 5-7bp at most, without considering impact of other constraints.

The reluctance of the RBI to cut rates - even as it acknowledges the need for easier monetary conditions - likely means that the OIS curve will stay range bound until the markets get a clearer signal from the central bank, in our view. The trade off between medium-term growth and inflation risks mean that the curve is likely to remain flat. We earlier recommended receiving 1y OIS at around 7.60%, targeting 7% with a stop-loss of 7.90% (see EM Asia Rates Strategy: India - Position for a possible shift in liquidity: receive rates, buy bonds, 15 June 2012). The 1y OIS rate has seen a high of 7.87% and a low of 7.42% in this period and is currently at 7.70%. We now close this trade idea given the penal negative carry. That said, we think that rates are unlikely to move sharply higher, given the easier liquidity conditions and lower growth risks. We would look to enter 5y OIS receive positions on upmoves towards 7.35% - a level we think is likely to be seen if the FOMC and/or ECB decisions later this week lead to higher regional rates.

Government bonds - stay long; impact of SLR cut on yields not as negative as headlines suggest

The 100bp SLR reduction should reduce "forced" demand from banks by about INR650bn, we estimate. However, the impact on bond yields is unlikely to be as negative as the headlines would suggest. We think the muted trend in credit growth, positive carry of longer dated bonds if funded via the repo rate and the fact that the RBI has left the held-to-maturity (HTM) investment ratio at 25% of the deposit base mean commercial banks are likely more incentivised to retain their current bond holdings unless they see a pick up in credit growth. However, growth dynamics likely mean that credit growth is unlikely to pick up meaningfully unless lending rates are lowered, which is we think necessary though not sufficient for an improvement in credit demand.

The bottom line is that while we have to reduce our expectations for lower yields - contingent on policy rate cuts - we think that bonds are still a good investment in India. We had earlier recommended going long bonds (entry 8.10%, stop 8.40%, current 8.22%) targeting a move towards 7.50% by end October. While we acknowledge that we might have to take near term mark-to-market losses given the heavy supply calendar in August, we remain comfortable with the view that bond yields are unlikely to drift materially higher from current levels. Hence, we maintain our recommendation of staying long bonds although we acknowledge that our target levels may now look a little optimistic to the upside.

Ultraviolette Auto looking at exports to EU, US