Private equity and venture capital investors pumped a record amount of money into India in 2017 but they backed fewer companies and pulled out a larger sum via exit deals than before in a year when caution remained a buzzword for dealmakers.

The year gone by also turned out to be relatively tepid for merger and acquisition activity with only the telecom sector recording major deals and a few transactions falling through, according to the annual report of VCCEdge, the data research platform of VCCircle.

However, private equity and venture capital deal activity in India decelerated in 2017, recording the sharpest-ever decline in the number of transactions. The total number of private investment deals, including PE, VC and angel/seed investments fell 36% to 1,030 transactions last year, VCCEdge data show.

This is the lowest number of such transactions in four years and surpassed the previous big slide in the number of deals in 2009 when dealmaking had declined 29% in the aftermath of Lehman Brothers’ collapse in September 2008 and the subsequent global financial crisis.

Still, the total amount of private investment hit a new high to $23.08 billion in 2017. This surpassed the previous best recorded in 2015 when startups were a hot commodity and VCs fell over each other to back them.

Total deal value jumped despite a drop in volume thanks to a clutch of large transactions in sectors such as e-commerce, banking, telecom tower and real estate. The share of big-ticket deals (more than $100 million) rose to 52% with 44 deals in 2017 versus 29 in 2016.

Factoring out the outliers, 2017 marked another year when investors placed bets on fewer companies than before. The number of PE deals involving mature companies—growth equity as well as control deals—continued to slide and VC firms turned more cautious in backing startups.

The starkest picture was observed in the angel/seed funding stage. Angel/seed funding, which typically captures the first set of external funding for budding business ideas, more than halved this year. This, in particular, pulled down the overall number of startups getting funded to 808 as against more than 1,300 in 2016.

In terms of sectors, the broader information technology sector recorded nearly half of the total number of deals in 2017, thanks to tech startups. IT was followed by consumer discretionary and financial sectors. In terms of deal value, the financial sector topped the chart.

The Indian Angel Network and Venture Catalyst were the most active angel and seed investors during the year. Among VCs, Sequoia Capital sealed 27 deals with the aggregate value of $84.34 million. Sequoia was followed by Accel India and IDG Ventures with 23 deals ($30.9 million) and 16 deals ($6.27 million), respectively.

Among PE investors, GIC closed the highest number of deals--six--during the year. In terms of value, Warburg Pincus topped the chart with a total of $576 million across four deals.

The merger and acquisition counter, too, reported a slowdown as a string of big-ticket transactions—such as those between HDFC Life and Max Life, IDFC and Shriram groups, and between Reliance Communications and Aircel—came unstuck. 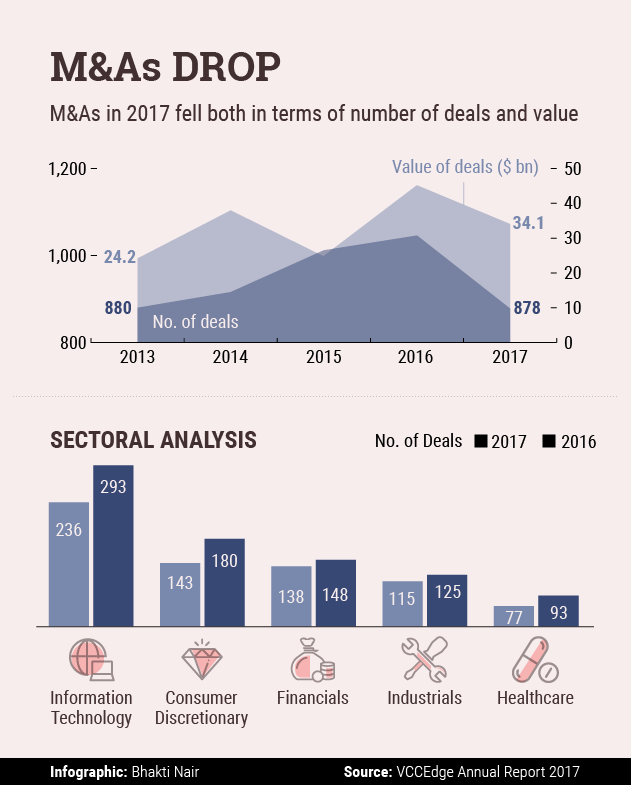 During the year, India recorded 878 deals worth $34.07 billion. The deal volume was the lowest in six years and fell 16% from 2016 when a number of billion-dollar-plus transactions in the oil and gas, cement and power sectors, among others, had also pushed up deal value.

In 2017, the M&A counter was propped up mainly by the $23.2-billion merger decision of telecom giants Vodafone India and Idea Cellular. The telecom sector also saw another major M&A deal that was triggered by the Vodafone-Idea merger plan. Both the firms sold their telecom tower assets to ATC for a total of around $1.2 billion.

Deals are marked by the original date of announcement and a transaction that spills over to the next year—like Chinese company Fosun’s acquisition of a majority stake in Gland Pharma originally announced in 2016—is counted in the preceding calendar year.

In terms of exits, 2017 was an eventful year for private equity investors, thanks to a few blockbuster deals. The top two exit deals alone contributed 30% to the total exit value. 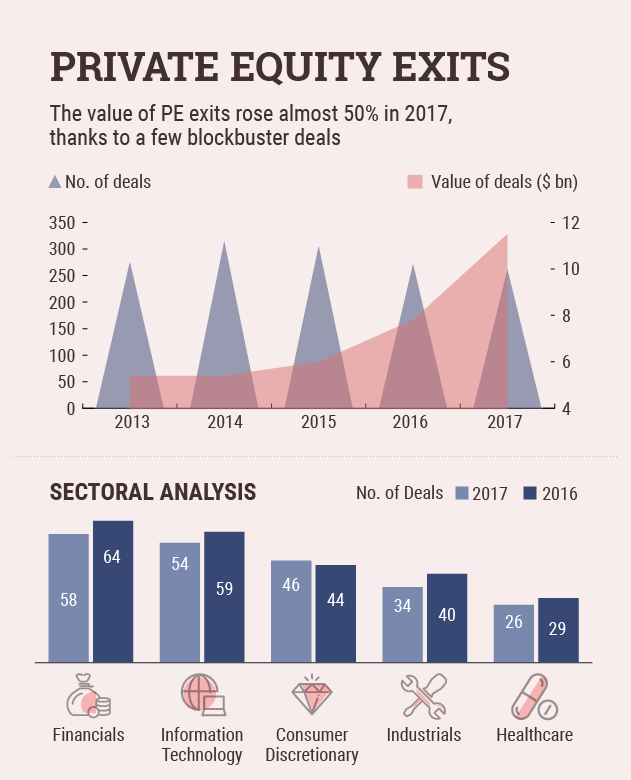 These two big-ticket deals include the sale by KKR, Sequoia and Saha Family in Aricent to Altran. The other key transaction was Qatar Foundation exiting Bharti Airtel for $1.49 billion.

The most preferred route PE firms adopted to exit investments during the year was open market sales. The number of open market exits increased 19% in 2017 to 111 deals from 93 deals in 2016. The deal value surged to $5.8 billion from $2.34 billion.

The financials sector led the exit activity with 58 deals amounting to $3.2 billion. The IT sector recorded 54 deals, followed by consumer discretionary, industrials and healthcare sectors.