The number of PE/VC deals in the sector hit a five-year low of 29 in the January-August period, according to VCCEdge, the data research platform of News Corp VCCircle. This does not include angel and seed funding deals in the sector.

The deals activity along with emerging trends in the healthcare sector will be discussed at length at the News Corp VCCircle Healthcare Investment Summit 2016 on 21-22 September in Mumbai.

Amit Varma, co-founder and managing partner at healthcare-focused private equity firm Quadria Capital, said that he does not see PE activity in the segment falling and that it will maintain the momentum.

The VC segment, however, is unlikely to experience the euphoria it noticed about a year back and activity in the space may remain muted, he added.

The biggest private equity deal in the sector was in the pharmaceutical segment with Quadria Capital picking up a minority stake in Ahmedabad-based drug maker Concord Biotech for $71.4 million.

The M&A transactions during the January-August period fell to a three-year low of 66 but were close to the 69 and 67 deals announced in the same period in 2014 and 2015, respectively, according to the VCCEdge data.

“PEs will keep looking at exits as an option via M&A, which will remain buoyant. We don't see any negative on this side," said Quadria's Varma.

Of the 66 M&A transactions during the period, 38 were domestic, eight were inbound and 13 were outbound.

The biggest M&A deal in the space was China's Shanghai Fosun Pharmaceuticals (Group) Co. Ltd's acquisition of a majority stake in Hyderabad-based Gland Pharma Ltd for up to $1.26 billion.

The IPO marathon for healthcare companies began with Syngene International Ltd, the research and development subsidiary of Indian biopharmaceutical major Biocon Ltd, in July 2015. The company made a strong debut on the stock exchanges, listing at a premium of 18% to its issue price of Rs 250 in August last year. Its share price has hit a high of Rs 510. 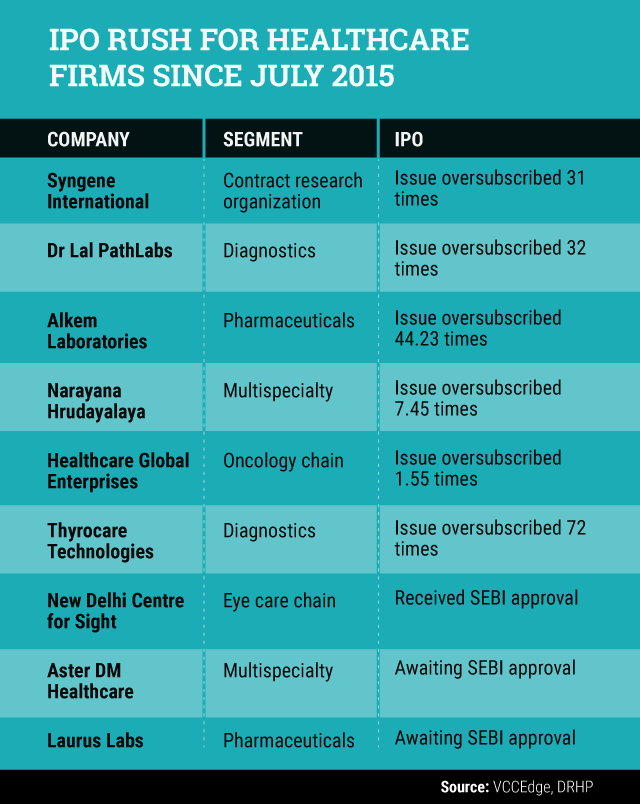 “We are very positive on IPOs across sectors. In the healthcare space even HCG prices have corrected as the company is meeting analysts' forecast and target," said Varma.

More healthcare companies are waiting in the wings to float an IPO. Eye-care chain New Delhi Centre for Sight has got market regulator Securities and Exchange Board of India's approval for its IPO. Multispecialty hospital chain Aster DM Healthcare and drug ingredients maker Laurus Labs have also filed for an IPO.