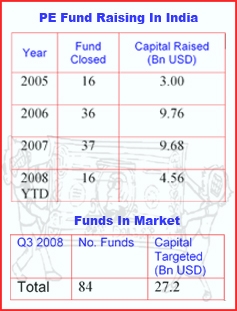 It's clear, fund raising is not going to be a cake walk if you dont have a track record to show as an investor. "Track record will become more important than ever, as will a defined plan for how the fund manager will adapt their focus to suit the current financial climate," Tim Friedman, spokesperson for Preqin, a London based research firm that tracks private equity fund raising globally.

In an earlier interview to VCCircle, Anubha Shrivastava, Portfolio Director, South and South East Asia, CDC Group, warned that general fund raising environment would be difficult in the current context. "But it's all for the good. This will really be the assessment time in terms of who are the managers that can actually attract capital (and who cannot)," she said.

Some of the Indian funds out in the market to raise capital are Avigo Capital Partners, Jacob Ballas Capital, Axis Private Equity, UTI Ventures, Blue River Capital, Tano Capital and Lazard India. Franklin Templeton's Darby Private Equity is also believed to be in the market for raising capital.

ICICI Venture, which had announced that it would reach assets under management of $10 billion by 2010, recently said that the fund raising is getting difficult. Renuka Ramnath told Mint recently: “The aspirations remain, but whether it will happen in 2010 or two years later, will have to be seen.”

There are many funds which could find these conditions becoming too challenging, and it is likely that we will see firms shelving their fundraising efforts until the market becomes more settled and investors become more receptive to making new investments.

If nothing else, the recent financial turmoil has substantiated one fact that the "we-can-make- money-in-any-market" thing isn't necessarily working out to the advantage of the hedge fund and private equity industries.

"Its going to be a challenging environment. Placement agents have a bigger role to play in such environment," said Managing Director of a private equity fund, looking to raise funds.

Talking more on the suffering of the alternative community, CDC's Shrivastava added that these are the testing times for the market and are actually good. "Because, at the end of the day, there was a lot of capital that were coming in driving up valuations and creating unattractive investing environment. Some of that flock will go away. People and teams who are strong will still continue to attract capital,"  she said. 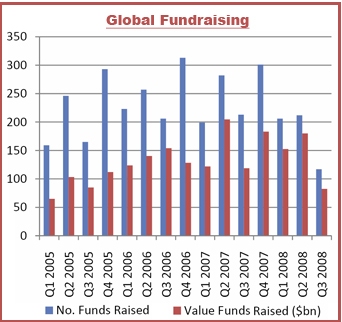 The trend is not confined to India alone. Private equity fundraising is slowing down globally if figures are any indication. The fund raising numbers for Q3 2008 are the lowest since Q1 2005, according to the latest Prequin data. The data shows that there were a total of 117 funds achieving a final close worldwide in Q3 2008, with these vehicles raising an aggregate $82.3 billion in capital. This is the lowest quarter since Q1 2005. (See the graphic, Global Fund Raising).

Typically, those who invest in the private equity funds are the large public pension funds, insurance companies and institutional investors. In the current downturn, some of the world's most conservative endowments and pension funds have suffered substantial losses in portions of their portfolio that were never intended to generate returns much more than basis points above treasuries.

"Institutional investors generally have massive diversified portfolios and most of their allocations are exposed to public equity and public debt which are marked-to-market on a daily basis", said Dustin Wunderlich, Executive Vice President, Arvco Capital Research LLC, an boutique investment bank based in New York.

Private equity investors that had substantial investments in public equities and poorly performing hedge funds are suffering the "denominator effect", explained Wunderlich of Arvco who have a mandate to raise money for the infrastructure fund for Yes Bank.

However, private equity funds found a booming business in Asia, which surpassed Europe for total capital raised in the third quarter, shows the Prequin data. (See the graphic, Regional Focus). The 25 funds in Asia and other global regions reaped around $12.5 billion in the third quarter, the first time in history the group raised more capital than Europe.

In contrast, the 31 funds surveyed in Europe raised only $11.9 billion. Private equity in the United States pulled in $57.9 billion from 61 funds. Despite the jump in Asian fundraising, the study's authors cautioned that private equity can expect to suffer from the global credit crunch and are likely to face a wave of consolidation in the near future.

"Private equity fundraising is set to enter its most challenging era of all time," said Friedman. With so many funds out there seeking investors, the capital available to them will be spread extremely thin, and only those that are extremely focused will be successful in raising the capital that they targeted at launch, added Friedman.

(Editor: All the graphs are based on data from Preqin)

IFC taps on blockchain to bet on climate-friendly projects