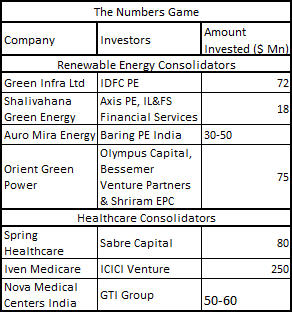 When IDFC Private Equity, India’s largest PE investor in infrastructure, zeroed in on renewable energy as the next big opportunity two years ago, it started scouting for companies in this

space. Raja Parthasarathy, managing director of IDFC PE, met up with companies in Uttaranchal, Andhra Pradesh, and Maharashtra but could not find a single company which had a vision of becoming a large renewable independent power producer.

So, Green Infra, IDFC's own outfit, was born. This fledgling company recently acquired BP’s India wind energy assets in a move that has catapulted it into the big league. Green Infra now aims to build a portfolio of 300-500 MW in three years with $72-million investment from the PE fund.

With the maturing of the Indian private equity market, consolidation plays are gaining ground. The aggregation or roll-up model—basically amassing capacities in a highly fragmented market--allows companies to reach a considerable size and, obviously, lends itself to a viable exit for investors.

“This company (Green Infra) can become of a size and scale where it can go public," Parthasarthy told VCCircle.

And, there are others in the renewable energy space such as Auro Mira Energy, Orient Green Power and Shalivahna Green Energy, all backed by private equity players, looking to build a portfolio of 250-500 MW in  three to five years. Last year, Olympus invested $35 million in Orient Green Power, also backed by PE firm Bessemer Venture Partners and Shriram EPC. Earlier this month, Indian Energy, which plans to buy wind power assets across the country, was listed on London's Alternative Investment Market (AIM) raising Rs 78 crore. Then there is Azure Power, focussed on solar energy, which got funding from Helion Venture Partners and Foundation Capital.

So, private equity firms are busy combing the Indian market to look for consolidation plays in a variety of sectors such as healthcare, BPO and banking. Vishakha Mulye, MD and CEO of ICICI Venture, says, roll-ups are possible in pharmacy and microfinance.

Now, take the case of healthcare. Dominated by a handful of players such as Apollo, Fortis and Max, this sector has seen consolidation plays, pioneered by Iven Medicare, ICICI Ventures’ hospital aggregator. Then there is Piramal Group’s India Venture Advisors, Milestone Religare Fund and New York-based private investment firm GTI Group. In fact, GTI has set up a day-care surgery chain Nova Medical Centers India and will invest around $50-60 million in the country.

“Healthcare is our key focus at this point of time. Our entire theme is built on the fact that there will be consolidation,” says Ajay Nair, senior associate at Sabre Capital. The PE firm has set up Spring Healthcare which aims to build a portfolio of hospitals, contract research organizations and diagnostic chains.

“Consolidation is a theme that PEs like as it helps them deploy capital and achieve scale. Obviously, it has to be in an industry where scale has advantages,” says Gaurav Malik, managing director of Olympus Capital Holdings Asia. The PE-firm has backed Orient Green Power, which is aggregating renewable energy assets and is also an investor in Raman Roy’s BPO firm Quattro, which also has a consolidation strategy.

These PE-backed firms also have an aggressive inorganic strategy, which is core to the roll-up model. This strategy helps companies scale up in four or five years, after which they can be sold either through a strategic sale or go for a listing. And, by acquiring smaller assets and combining them, PE firms manage to get better returns rather than negotiating a deal with a larger player.

But, the market is not witnessing too many M&As just yet. PE players believe that domestic and international players will look at these companies in the next four to five years.

Now, consolidation plays are not completely new to India. One of the most prominent roll-ups in India was Centurion Bank of Punjab (CBoP) formed by a combination of Centurion Bank, Bank of Punjab and Lord Krishna Bank. Sabre led the investor group and made a 103% IRR on its

investment when CBoP was sold to HDFC Bank.