Mobile balance tracker Mubble gets Series A funding from Accel 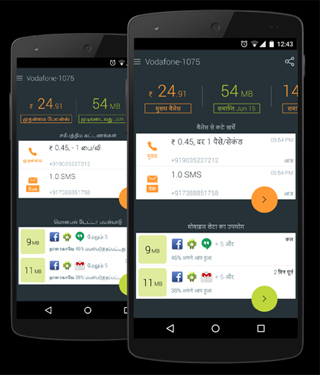 Mubble, an Android app that allows prepaid cell phone users to do postpaid-like usage tracking, has raised an undisclosed amount in Series A funding from Accel Partners.

The Bangalore-based startup, run by Mubble Networks Pvt Ltd, will use the capital to scale up business, it said in a statement.

This is Mubble’s second round of fundraising in less than a month’s time. In September, it had secured an undisclosed amount of investment from Infosys co-founder Nandan Nilekani.

Mubble assists prepaid mobile users to curtail unexpected balance deductions by generating something similar to an itemized usage bill on the handset itself. It intimates users of charges incurred after every call, SMS or data session and saves that information on the device for future reference. Mubble does this through an on-device text analytics engine.

“We will use the funds to attract the best tech talent and build a world-class product, designed for the masses of India,” said Ashwin Ramaswamy, co-founder and CEO of Mubble.

Mubble was founded in 2013 by Ramaswamy, Pranav Jha and Raghavendra Verma. An alumnus of IIT Madras and IIM Bangalore, Ramaswamy has more than 18 years of experience in telecom, retail and consumer goods industries. He has had senior management stints with Bharti Airtel, Jubilant Retail and Johnson & Johnson. Jha, who is also chief operating officer, has previously worked with Infosys, BMC Software, OnMobile and other companies. Verma, who is also chief technology officer, was a founding team member at OnMobile.

Mubble claims the app has clocked about a million downloads in less than a year since inception. The app is designed to work offline and is available in multiple Indian languages.

In a recent interaction with Techcircle.in, Ramaswamy claimed that Mubble is the only app in the world which provides usage-related data scraping and tracking on dual-SIM phones. Ramaswamy said that Mubble’s nearest global competitor is piBalance, a similar offering by a Russian entrepreneur for single-SIM phones.

“The app ecosystem in India is evolving rapidly; we think Mubble’s ‘data-guard’ will enable the new-gen smartphone users to navigate this ecosystem predictably,” said Subrata Mitra, partner at Accel Partners.

US-based Accel Partners, active in India since 2005, has backed marquee names such as Flipkart, Mu Sigma and BookMyShow, among others.

Accel provides seed and early-stage capital to companies in sectors such as infrastructure, technology, internet and consumer services, mobile, software and cloud-enabled services, media, life sciences and consumer products. It recently raised $305 million for a new India-focused fund. Accel recently made an undisclosed seed investment in Bizongo, a B2B marketplace for industrial goods.