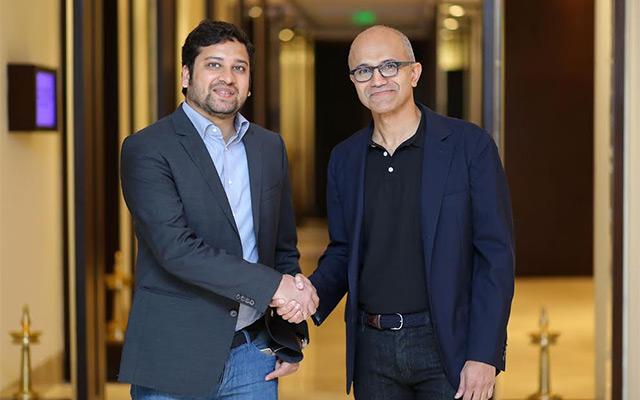 Global technology leader Microsoft and India's top e-commerce firm Flipkart have announced a broad collaboration under which, as a first step, the latter will use Microsoft Azure as its exclusive public cloud platform. Microsoft CEO Satya Nadella and Flipkart group CEO Binny Bansal together announced the partnership at an event in Bangalore on Monday.

The deal will help Microsoft make inroads into India's cloud market, where it is locked in a fight for supremacy with Google, IBM and Amazon's Web Services, which enjoys a significant lead over other players.

“Given Microsoft’s strong reputation in cloud computing, coupled with scale and reliability, this partnership allows us to leverage our combined strength and knowledge of technology, e-commerce and markets to make online shopping more relevant and enriching,” said Bansal.

Microsoft has been betting on startups to push its cloud business in India. “The centre of entrepreneurial energy for us in India is around cloud,” said Nadella in a chat with Nandan Nilekani, Infosys co-founder and founder chairman of UIDAI. Nadella said that a payment infrastructure being built on top of Aadhaar using cloud (NPCI) and a diagnostic application (Collaborative Digital Diagnosis System) were welcome developments.

He said many startups, such as hotel aggregator OYO Rooms, have adopted Azure. “In the last 12 months we had 2,000 Indian startups using our cloud. It is fantastic,” Nadella said.

He added that companies like Flipkart have started the second wave of technology entrepreneurialism in the country. The first was when Infosys was founded in the early 80s, Nadella said.