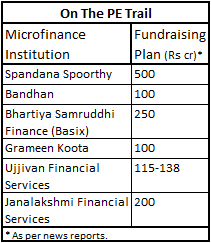 The short-lived euphoria of India’s first blockbuster microfinance IPO, SKS Microfinance, and the business environment uncertainty in Andhra Pradesh (following regulatory changes), which is the hub of MFI activity in the country, have dashed the fund-raising hopes of many players.

Over a handful of established MFI players such as Basix, Bandhan, Spandana, Ujjivan, Grameen Koota and Janalakshmi, are on the road or contemplating a private equity fund-raise in the next six months. Back of the envelope calculations show that there could be private capital inflow of at least Rs 1,500 crore (subject to deal closures) in the short term.

So, will private equity, which is already beginning to look beyond MFI in the social sector space, actively chase this sector it literally helped to scale? The verdict is still not out yet but what is clear is that investors are adopting a wait-and-watch on Andhra-focussed MFIs. More significantly, valuations in the MFI sector, which were ruling at a peak thanks to heavy investor interest, may be turning more realistic offering new entrants an attractive entry point, a sector tracker said.

Also, raising private equity funding will not be easy for MFIs in the short to medium term. "Given the large cloud of uncertainty around the microfinance space, funding will dry up in this sector. Valuations will drop significantly given the increase in risk and and the public markets reaction to SKS Microfinance," said Ravi C Adusumalli, partner and India head at SAIF Partners, which manages $3.5 billion in funds.

According to Eric Savage, Co-Founder and President, Unitus Capital, a financial advisory firm specializing in microfinance sector,  “The fundraising environment is challenging at the moment given the situation in Andhra Pradesh. At the same time, the medium-to-long term outlook is very robust given the massive market demand for financial products by the BOP.  We expect that deals done in the short term will be outside of AP and, depending upon the situation, will be completed at a 0-to-20% discount to where they could have been done a month ago.”

A senior official, representing a fund that invests in social sector projects said, on condition of anonymity, “Future valuations will price in political and regulatory risk. The uncertainty (in Andhra) is expected to improve on the debt side in the coming weeks. On the equity side, confidence will return once it becomes clear that debt is available and growth outside Andhra will not be impacted.”

While the low valuations may attract some investors with higher risk appetite, will PE firms take this opportunity to invest in this sector? "No, I don't believe so. I believe that there is too much that is unknown to venture into this sector," added Adusumalli. Though SAIF Partners has looked at MFIs for investment in the past but has stayed away due to valuation expectations.

The Andhra Pradesh ordinance makes it mandatory for MFI to register themselves, specify the area of operations, rate of interest and system of recovery. It adds that interest charged should not exceed the principal, and the MFIs must bear the amount that exceeds the principal. The ordinance also says MFIs cannot take any security for their loans and not sanction a second loan till the first one has been cleared.

The ordinance will have a major impact on the industry as more than 25% of the total loan outstanding of MFIs in India and the largest number of microfinance clients (6.25 million) come from Andhra Pradesh, according to Saadhan, reported Mint.

After the ordinance came out, India's largest MFI SKS Microfinance said that it could make business difficult and hurt profitability. SKS was listed at Rs 985 per share in August this year and moved up by more than 50% to reach a high of Rs 1,490 per share in the following weeks. But with SKS also firing its CEO Suresh Gurumani coupled with the AP Ordinance, the share price has slipped by more than 50% (and much below issue price of Rs 985) to close at Rs 711.45 on Friday.

While the Andhra situation is creating uncertainty in the microfinance space, there is definitely continued interest in the space - both debt and equity - from seasoned and well established capital providers, said an investor in the social sector space.

What many are watching is whether the situation gets more complex or if the problem remains contained at the Andhra level. “AP-based MFIs are definitely going to struggle – and even with the larger MFIs with multiple state operations, a substantial amount of their lending is in AP (Spandana still has over 50% of their portfolio in Andhra). This is definitely going to impact growth in the sector - and consequently valuations,” he added.

But, some believe that the ordinance may have come as a blessing in disguise. "At a time when many microfinance institutions were obsessed by growth, the shake-up caused by the AP Ordinance has potentially helped create a great platform for all the industry’s stakeholders to

come together and take action on multiple issues (self-regulation, corporate governance, transparency, code of conduct, client focus, stake-holder communication) – strengthening the sector in the long-term, and creating the base for a possible second wave.  We see this as a tremendous opportunity for serious investors to enter at an inflection point in the industry at attractive valuations," said Atreya Rayaprolu, Vice-President at Intellecap, a leading social

Padmaja Reddy, founder of Andhra-focussed MFI Spandana, is reviving the private equity fund raising plan and is looking to raise Rs 400 crore to Rs 500 crore. Spandana was looking at making its market debut, as per its initial plan but the turn of events, following SKS’ market outing, have triggered a change in course. It is possible that, like Spandana, many MFI players, who were keenly hoping for a market debut, will put their plans in the freezer for now.

With the IPO option turning bleak, MFI players are turning to private equity, subordinated debt, NCDs or securitization to shore up capital (both debt and equity). In fact, many of them will be actively trying to raise funds to meet their growth plans and the capital adequacy requirement of 15% from April 1, 2011. (CAR is the minimum amount of cash that a financial institution needs to set aside as a % of its loan book). Till now, no capital adequacy ratio was required mandatorily but a ratio of 10-12% was suggested by the Reserve Bank of India.

Indian MFIs have raised more than $450 million across 66 deals from private equity investors since 2006, according to VCCEdge. Investors in the sector include international DFIs like IFC, Silicon Valley Bank to venture capital firms Sequoia Capital and Canaan Partners, social VC firms like Aavishkaar and Elevar to hedge funds like Sandstone Capital and Tree Line Asia.

Many social venture capital firms which started with investing in microfinance institutions (which still remains primary focus) have also started branching out their investments to upcoming areas. These include other areas of financial inclusion like banking correspondents, affordable housing and healthcare, rural energy and water needs, among others.