Junior employees of companies are the primary perpetrators of fraud incidents in India and stealing of physical assets is the most common means of showing their discontent with the firms they belong to, according to Kroll Global Fraud and Risk Report 2016-17.

In India, the other types of fraud include management conflict of interest, corruption and bribery and vendor, supplier and procurement fraud as well as internal financial fraud (manipulation of company results).

“While local businesses can see behind the scenes, foreign investors struggle to do so, which creates an opportunity for fraudulent activity,” Reshmi Khurana, managing director and head of South Asia in Kroll’s Investigations and Disputes practice, said in the report.

Fraud, corruption and security concerns have also deterred investors from investing in the country, the report said.

According to the report, globally, the incidences of fraud have continued to climb markedly. Overall, 82% of surveyed executives reported falling victim to at least one instance of fraud in the past year, up from 75% in 2015. Fraud concerns are, however, highest in China and India. While in a developed market like the US where the most common types of fraud included IP theft, in China, it is regulatory or compliance breach. In India, disgruntled employees resort to stealing of physical assets.

The number of cybersecurity incidents is lower than global average in India. This could be because many sectors in India—apart from the financial services industry—are not as digitised as they are in most developed countries, which reduces their exposure to cyber security risk, the report said. 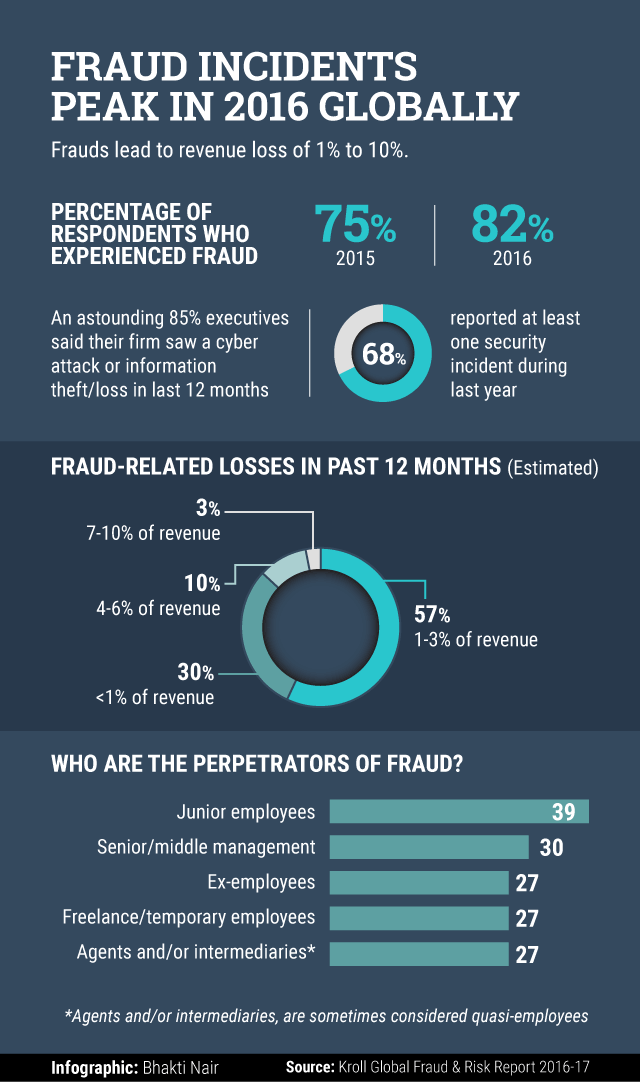 India is also vulnerable to security incidents and the most common perpetrators of hazards are permanent employees of companies. Over 52% participants said they felt most vulnerable to workplace violence, followed by other forms of violence such as international or domestic terrorism.

The report was based on 10 in-depth interviews and an additional online survey with 545 senior executives across multiple industries and geographies.