With sellside economists’ GDP estimates being cut regularly (our estimate remains above 7%), with the INR in a free (our target INR/US$56-58), India's star appears to be fading. However, as shown by a series of long term charts in this note, the Indian market is unquestionably ‘cheap’ now. Whilst given the scale of the European crisis and given India's comatose Government, it is easy to be bearish on India, these charts suggest that now is almost as good a time as any to BUY India. The country will rarely look as attractive on valuations when the world economy perks up and when India's growth hits its cyclical peak (v/s the cyclical trough that it is

(refer to the right hand margin). In fact, India has appeared cheaper than it is at present only once or twice in the last ten years: 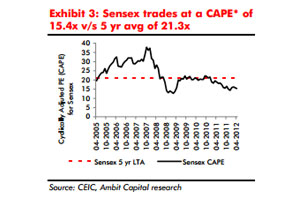 Given that India appears oversold on long term metrics, unless you believe that there is another Lehman on the way, it makes sense to take a bolder approach to

buying high-quality, sensibly-valued companies in India. Fifty such companies were highlighted in our "Good & Clean 4.0: the Great 50" note published on May 03, 2012.

Furthermore, leaving our charts aside, it is worth considering the three upcoming catalysts highlighted in our email last week (India Strategy: Blinkered by all the

1. Change in FM: With the current FM likely headed for a more prestigious but more titular role, the three candidates who appear to be in the frame for the FM’s role appear to be more progressive candidates than the incumbent.

2. More QE from the West: We have seen the QE playbook being rolled out repeatedly by the ECB and the Fed. Given the potential risks to the European banking system and given a pro-growth (hence anti-austerity) leader heading France, it would be very strange if the ECB did not use the monetary fire hose to calm the markets down eventually.

account deficit by 40bps. We are not oil experts but looking at the weakening Chinese economy and listening to the Saudis talk about how they will work proactively to push Brent to US$100, we cannot but feel optimistic.

(Saurabh Mukherjea is the head of Institutional Equities at Ambit Capital.)

Winter getting stronger: Lacklustre momentum leads to drop in PE/VC deals in Q2