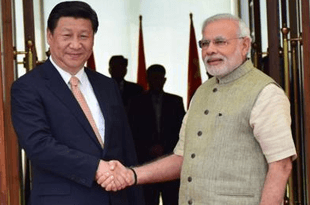 India and China on Thursday inked 12 pacts in a range of areas including railways and outer space as Beijing pledged investments of USD 20 billion over five years in a bid to boost economic ties and address India's concerns over trade deficit.

The agreements were signed after Indian Prime Minister Narendra Modi and Chinese President Xi Jinping held extensive talks on entire gamut of ties between the two countries including the boundary dispute and visa issue.

A key pact on trade and economic cooperation will provide for USD 20 billion Chinese investment in India over a period of five years. The agreement lays down a medium term roadmap for promoting balanced and sustainable development of economic and trade relations.

Another MoU, signed between External Affairs Minister Sushma Swaraj and Chinese Foreign Minister Wang Yi, will facilitate the annual Kailash Manasarovar Yatra by Indian pilgrims through Nathula Pass in Sikkim in addition to the existing Lipulekh Pass in Uttarakhand.

The route through Nathula will augment the capacity and reduce the hardship and journey time enabling many more pilgrims, in particular the elderly, to undertake the Yatra.

China has also agreed to strengthen India's Railways network and two pacts were inked aiming at increasing speed of trains, studying feasibility of cooperation in high-speed railways and redevelopment of railway stations.

An action plan will be prepared between Railways Ministry and the National Railway Administration of China on strengthening cooperation in Railways. The pact provides specific projects for cooperation in railways.

A separate pact on Audio-Visual Co-production between the Information and Broadcasting Ministry and China's State Administration of Press, Publication, Radio, Film and Television was also signed to enable producers from both countries to get an opportunity to pool their creative, artistic, technical, financial and marketing resources to co-produce films.

The two sides also decided to enhance cooperation in matters related to custom administration and inked a pact that will help strengthening cooperation to fight trans-border economic crimes and custom offences through sharing of information.

It would also facilitate trade through enhanced customs cooperation.

A pact was inked between Indian Space Research Organisation and China National Space Administration on cooperation in the peaceful use of space.

The MoU enables both sides to encourage exchange and cooperation in the exploration and use of outer space for peaceful purposes, including research and development of scientific experiment, remote sensing and communications satellites.

Another MOU was signed to foster long-term collaboration between various cultural institutions of the two countries.

These institutions include museums, archaeological organisations and performing art centres.

Both sides also agreed to carry out cooperation in fields of drug standards, traditional medicine and drug testing. A pact was inked in this regard.

Another agreement was signed to establish Sister City relationship between Mumbai and Shanghai. It will enhance people-to-people exchanges fostering greater mutual understanding.

China has also agreed to participate in the New Delhi World Book Fair 2016 as the Guest of Honour Country.