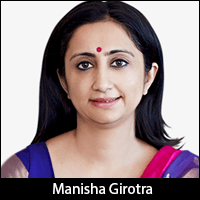 Ashok Leyland Ltd, the second-largest commercial vehicle maker in India, has appointed Manisha Girotra as its independent director on the board, as per a stock market disclosure.

Manisha, who is currently CEO of the Indian arm of global mid-market investment bank Moelis and Co, is also on the board of Paris-based construction and engineering company, Technip and IT consultancy services firm Mindtree Ltd.

She has been one of the most prominent women dealmakers in the country and a specialist in investment banking, mergers & acquisitions and wealth management.

In another board level movement, YM Kale has resigned as an alternate director, the company announced in the same filing.

Chennai-headquartered Ashok Leyland, one of the top companies of the Hinduja Group and the largest supplier of buses to state transport corporations, manufactures and sells commercial vehicles in India and internationally.

Two months ago the firm raised over $111 million through a QIP. In another transaction, it sold a property in Chennai for Rs 210 crore (around $35 million).