Second, with falling solar panel prices—our estimates show an over 50% decline in the last five years—and improving wind technology yields, renewable energy has not only become cost-competitive, but also offers low installation and feedstock risk vis-a-vis conventional power. This makes it a preferred asset class for developers and investors, which is exemplified by the recent ~Rs 2.44/kilowatt-hour bid for solar power and Rs 3.46/kilowatt-hour bid for wind power, as reported by the media in 2017. These figures are significantly lower than the tariff for new thermal and hydel capacities.

These fundamental changes have led to the equity, debt, and mergers & acquisitions (EDM) triumvirate, propelling growth in the renewable energy space in general and solar energy in particular.

First, the sources of equity or quasi-equity capital for renewable energy projects have changed significantly. During 2009-13, the majority of renewable energy independent power producers (IPPs) or projects were funded either by venture capital and private equity funds, corporates on an opportunistic basis and the alternate investment market. This is indicative of the relatively high-risk nature of the business. After 2013, as businesses and the sector achieved scale and maturity, the equity or quasi-equity investments have primarily been led by pension funds, sovereign funds, large Indian and global utilities and mezzanine funds on the back of existing operating cash flows of the company. 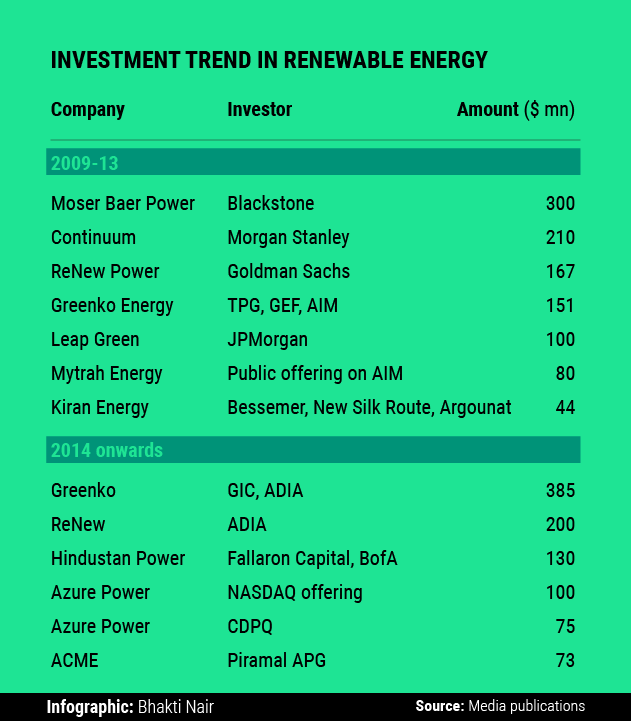 Second, debt funding for renewable energy projects has seen a considerable shift. In the initial years (2009-13), the projects were primarily funded by banks or non-banking financial companies (NBFCs). Further, the debt-equity ratio and debt service coverage ratio for these projects were conservative and most projects needed some form of sponsor support for financing. In recent years, however, not only have the avenues for bank debt funding expanded in terms of flexibility of leverage, but non-recourse financing has also become much easier to achieve. Additionally, apart from banks and NBFCs, infrastructure debt funds are playing an active role in refinancing operating renewable energy projects, thus improving the return profile of projects and freeing up balance sheets of banks and NBFCs for further lending.

However, the most significant development has been the ability of renewable energy projects to access debt capital markets. There have been significant bond issuances from domestic and international investors in recent years, which are highlighted in the table above. Green bonds and masala bonds have been two important and innovative debt capital market instruments that have further improved the pricing and return profile of projects.

Given the changes in scale, maturity and investor class, the sector has seen substantial thematic mergers and acquisitions. Based on our analysis, there are three themes driving M&As in the Indian renewable energy sector.

First, initially, quite a few projects were set up by corporates whose core business was not power development. This was primarily to test the waters and utilise additional cash available in their core business to generate annuity revenues. Now, as the industry has scaled and the return profile is constrained due to the highly competitive reverse auction process, several of these corporates are seeking to exit their investments. 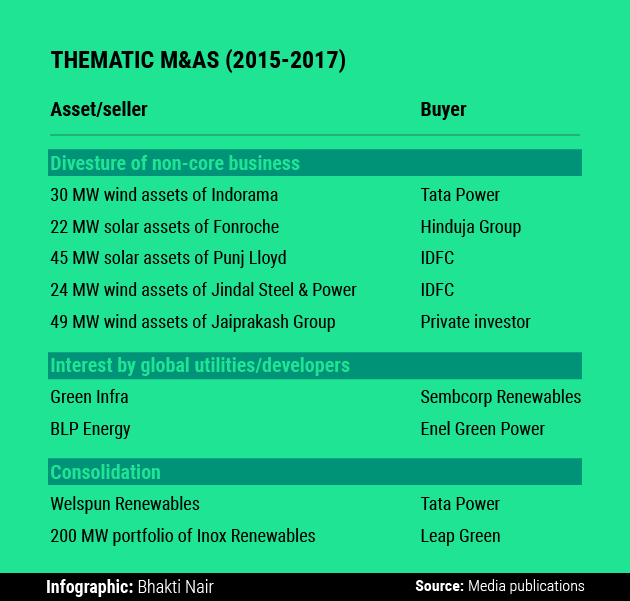 Last, with India emerging as one of the largest renewable energy markets in the world (and the second-most attractive country after China for renewable energy investment as per recent surveys), there has been substantial interest from large global investors and utilities. Many of them have taken the inorganic route to enter and develop presence in the Indian market, driving large M&As in the sector.

Over the next few years, renewable energy is likely to see significant activity in terms of capital-raising and thematic M&As. As the sector's scale, return profile and maturity change, the key to succeed will be attracting the right set of capital-raising avenues and strategic partners to remain competitive and enhance shareholder value.