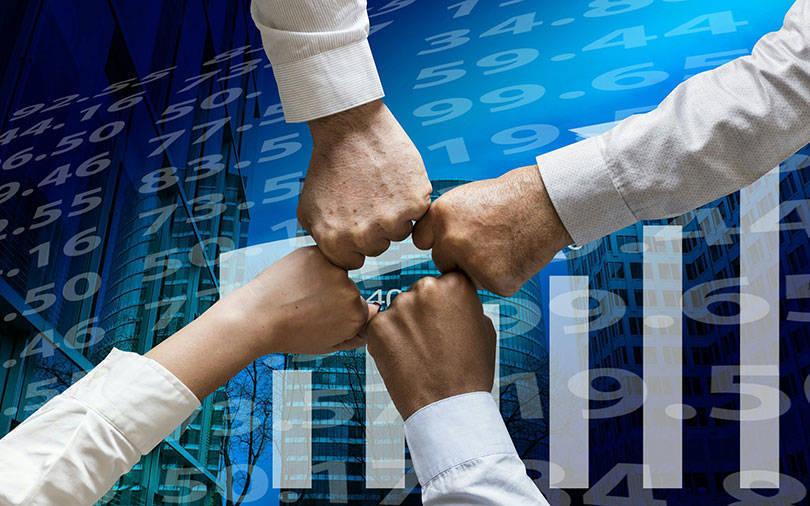 World shares paused on Monday to assess a record-breaking month as the prospect of a vaccine-driven economic recovery next year and yet more free money from central banks eclipsed immediate concerns about the coronavirus pandemic.

Helping sentiment was a survey showing that factory activity in China handily beat forecasts in November, and the country's central bank surprised with a helping of cheap loans.

Chinese blue chips ended lower but up nearly 6% for the month and, though Europe's traders were reluctant to add to their bumper November, it was not going to detract from a record-busting 15% month.

The rush to risk has also benefited oil and industrial commodities while undermining safe-haven dollar and gold.

"It has been a very, very strong month for markets, especially on the equity side but also on the fixed income side too," said Rabobank's Head of Macro Strategy Elwin de Groot. 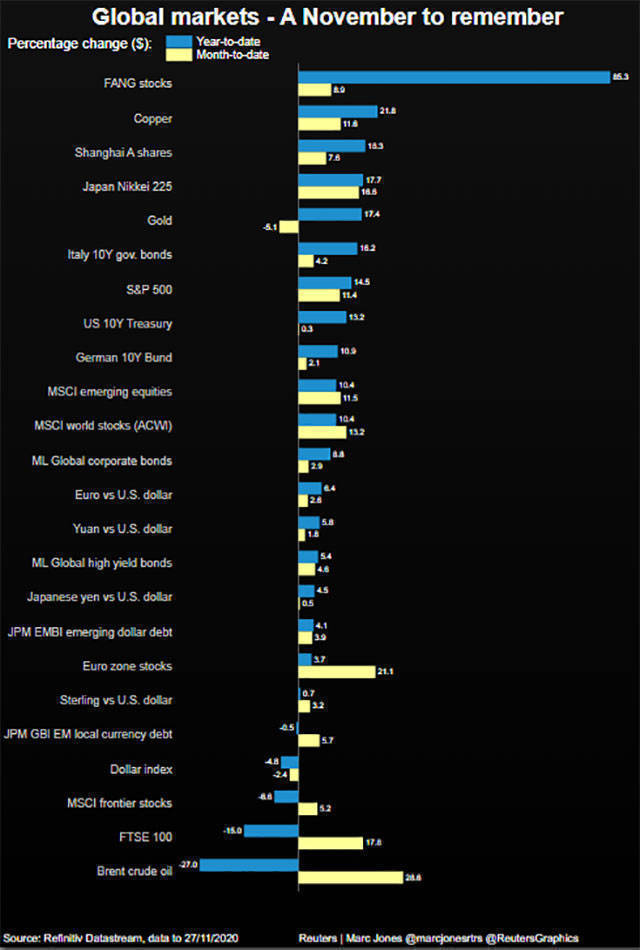 The positive developments on vaccines and swiftness with which they are likely to be rolled out had been key drivers.

"And this market still remains very much supported by liquidity from the central banks," De Groot added. With the ECB set to provide more stimulus next month "the market view seems to be, what can possibly go wrong?"

Many European bourses are boasting their best month ever with France up 21% and Italy almost 26%. The MSCI measure of world stocks is up nearly 13% for November, while the S&P 500 has climbed 11% to all-time peaks.

MSCI's broadest index of Asia-Pacific shares outside Japan had ended 1.5% lower on the day but was still up almost 10% for the month. 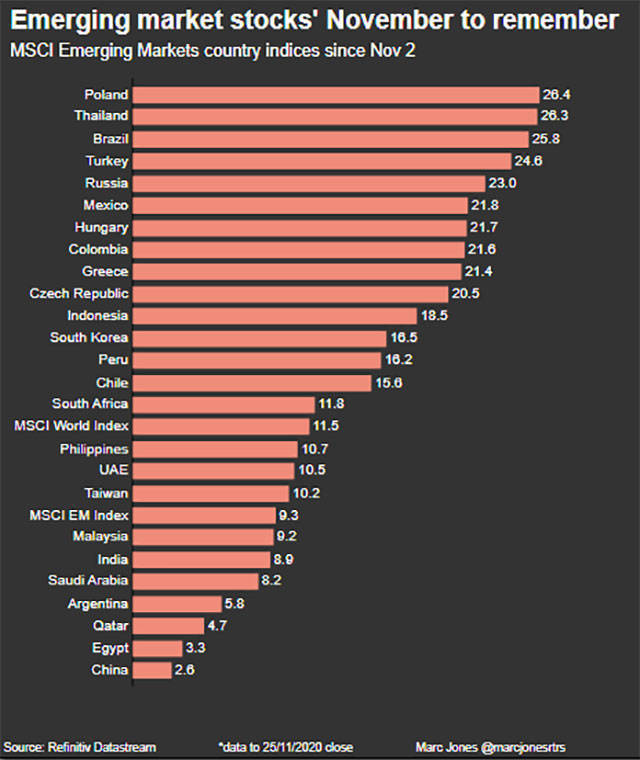 "Markets are overbought and at risk of a short term pause," said Shane Oliver, head of investment strategy at AMP Capital.

"However, we are now in a seasonally strong time of year and investors are yet to fully discount the potential for a very strong recovery next year in growth and profits as stimulus combines with vaccines."

Cyclical recovery shares including resources, industrials and financials were likely to be relative outperformers, he added.

The surge in stocks has put competitive pressure on safe-haven bonds but much of that has been cushioned by expectations of more asset buying by central banks.

Sweden's Riksbank surprised last week by expanding its bond purchase program and the European Central Bank is likely to follow in December.

Federal Reserve Chair Jerome Powell testifies to Congress on Tuesday amid speculation of further policy action at its next meeting in mid-December.

As a result, U.S. 10-year yields are ending the month almost exactly where they started at 0.84%, a solid performance given the exuberance in equities.

The U.S. dollar has not been as lucky.

The dollar has even declined against the Japanese yen, a safe-haven of its own, losing 0.7% in November to reach 103.89 yen, though it remains well above key support at 103.16.

Sterling stood at $1.3334, having climbed steadily this month to its highest since September, as investors wagered a Brexit deal would be brokered even as the deadline for talks loomed ever larger.

One major casualty of the rush to risk has been gold, which was near a five-month trough at $1,771 an ounce having shed 5.6% in November.

Oil, in contrast, has benefited nearly 30% from the prospect of a demand revival should the vaccines allow travel and transport to resume next year.

Some profit-taking set in early on Monday ahead of an OPEC+ meeting to decide whether the producers' group will extend large output cuts. Brent crude futures fell 52 cents to $47.66, while U.S. crude eased 60 cents to $44.93 a barrel.