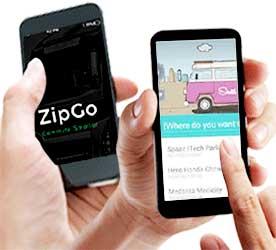 Bus pooling startups Shuttl and ZipGo have raised venture capital funding, two people familiar with the development told VCCircle, as investors eye a new category of transport service providers after pouring millions of dollars in taxi aggregators such as Ola and Uber.

Gurgaon-based Shuttl has raised $20 million from Sequoia Capital, Times Internet Ltd and an international fund, one of the two people said, asking not to be named. The name of the overseas fund couldnâ€™t immediately be ascertained.

Amit Singh and Jitender Sharma, co-founders and CEOs of Shuttl and ZipGo respectively, refused to comment.

Separate emails to Sequoia Capital, Times Internet and Orios Venture for comment did not elicit any response till the time of filing this article.

Shuttl, owned by Super Highway Labs Pvt Ltd, was founded by Amit Singh and Deepanshu Malviya in April. It had raised $3 million from Sequoia and angel investors in August, according to data from VCCEdge, the data research platform of VCCircle.

The startup offers shuttle services to commuters across 20 routes in Delhi-NCR. It has around 500 air-conditioned and GPS-enabled buses on its platform doing 8,000 rides a day starting at Rs 20. Commuters can register on the Shuttl app, choose pickup and destination locations, and view bus timings on the network. Users can then book seats by cashless payment on the app via their accounts.

The ZipGo app aggregates and runs 12-seater maxicabs in Bengaluru with rides starting at Rs 29. The startup does about 3,000 rides a day. ZipGo recently launched women-only bus service in Delhi-NCR. Itâ€™s piloting the service in Dwarka, Gurgaon and Manesar areas and plans to start a pilot in Noida and Greater Noida later this month.

Bus pooling for daily commute or intra-city transport is a relatively new concept in India. A host of tech startups have started aggregating buses or mini-buses in recent months. These ventures are asset-light and do not own vehicles themselves but come across as a booking platform similar to taxi hailing apps Ola and Uber.

There is tremendous investor interest in this segment. Investors believe that bus pooling can become a popular mode of transportation in cities and that it can create a market opportunity equal to or larger than what cab hailing is today.

It has 60 buses on its platform in Mumbai and provides services on 10 routes. It offers about 2,200 customer rides daily. The company collects ticketing revenue from customers and charges bus operators for its services. With the latest round, Cityflo plans to first strengthen its Mumbai operations before expanding to other cities.

Founded by Siddharth Sharma, Anshul Khandelwal and Vivek Choksi, rBus offers 40 daily trips, catering to over 500 customers. Since it started operations earlier this year, rBus has expanded to 11 routes and is adding new ones.

However, an early exception in this sector is Trevo, a bus aggregation startup based in the national capital region that shut shop after operating for barely a month. Trevo was launched in early October by IIT and IIM alumni Mayank Jain, Raghav Jain and Nikhil Vij. The trio had last year launched TalentPad.com, a technology recruitment marketplace that shut shop in August. Mayank and Raghav had previously formed a social referral startup called Zobtree that was also shut down.

Although the founders declined to disclose the reasons behind the startupâ€™s closure, a person familiar with the development had earlier said the company was struggling due to lack of funds. â€œWith a high cash burn rate, they couldnâ€™t survive for more than a month and eventually shut down operations around Diwali,â€ the person said.

The latest entrant in this segment is Mojo, which is operational on Dwarka-Gurgaon and Ghaziabad-Gurgaon routes in the national capital region.