Early-stage VC funding in India and the subsequent investor returns turned out to be one of the major talk points at the gathering of Internet game changers, organised by TIE (Delhi Chapter) to celebrate the India Internet Day on May 24.

A panel comprising Vani Kola of Indo-US Venture Fund, Aashish Bhinde from Avendus, Dinesh Agarwal from IndiaMART and Alok Mittal from Canaan Partners voiced the feelings of the VC community – what are they looking for in entrepreneurs and the returns they are expecting. 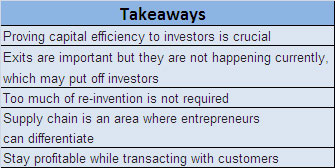 The discussion kicked off with a near-inevitable comparison between India and China. China has stepped up efforts to develop more home-grown funds and the domestic capital raised in China during the last year amounted to 40 per cent of the total investments, compared to India’s meagre 5 per cent.

But Bhinde of Avendus did not feel that India would require to rely on domestic capital alone. “India is going to be more capital efficient and thus doesn’t require the same kind of domestic capital as China. The most recent example of Warburg Pincus’ investment in Quikr is a strong indication of that conviction and more such deals will come.”

Investors not ready to bet big?

According to Vani Kola of Indo-US Venture Fund, the appetite of early-stage investors has only increased but unless more companies can ensure good returns and profitable exits, the capital will be only targeted at top-tier companies recording extraordinary growth.

However, the investors agreed that the Indian growth story could not be built in a span of 3-5 years and entrepreneurs must have some more time to evolve. In the current market scenario, VC exits are not happening as they should due to several factors. But all panel members agreed that companies should be given some more time to provide adequate returns on the capital infused.

Kola raised another key point by mentioning that most entrepreneurs today are asking for an exuberant amount of funding, which can irk several investors. “Either you take the capital in small portions and grow the market organically. Or if you are gunning for bigger amounts, show that kind of growth rates,” she added.

Bhinde, however, felt that if the market is being compared to China or the US, one should take examples from there as well. “If one has to create an Alipay (China’s leading third-party online payment platform) in India, $10-20 million will be required upfront. Probably, the investor community is not yet ready to bet that big,” he noted.

E-com is passé, but what’s hot

The session came to an end with the panel members zeroing in on the sectors which are still hot for the entrepreneur community. According to Kola, social networking and communities is one open opportunity in India while online gaming and payments are other sectors that would draw investors. Investors are sceptical about e-commerce though, and unless there’s a huge differentiation or innovation, funding may not be forthcoming in that space. According to Agarwal, vernacular entertainment is another space with possibilities. “The vernacular entertainment segment may not ensure immediate monetisation, but it is a great opportunity,” he added.