Dozens of emerging market funds have closed this year as turmoil unleashed by the coronavirus has damaged investor sentiment towards the asset class, where returns lag those of developed economies.

A weaker U.S. dollar, which would typically have boosted emerging markets, has failed to lift investor sentiment, and cash has been slow to return after large outflows triggered by the pandemic.

While many emerging market funds were struggling before the pandemic, closures may be gathering pace, with 51 emerging equity funds liquidated in the first eight months of the year, data from Morningstar showed, up from 44 a year earlier.

The data also showed that 23 emerging currency fixed income funds were liquidated so far this year. Across fixed income and equities, 93 funds were closed or merged this year, compared with 106 in the previous year.

A disappointing run of returns and thin liquidity at some funds is heaping on the pressure, said Mathieu Caquineau, associate director of Morningstar.

"There are also growing concerns on the macro outlook for some EM countries as the COVID-19 crisis unfolds. Higher fund closures are likely a reflection of the asset managers responding to investors' lack of demand," said Caquineau.

Asset managers are divided on the outlook for emerging markets and whether they will stem the underperformance. This week, the BlackRock Investment Institute downgraded emerging local currency debt to underweight, while Goldman Sachs said emerging hard currency bonds will see double-digit returns.

Investors withdrew almost $24 billion from cash funds in the past week to switch into emerging markets, BofA analysts said on Friday, citing EPFR data for the week to Sept. 9,

PIMCO will close its Emerging Market Currency and Short-Term Investments Fund, the Financial Times reported last month, citing a U.S. Securities and Exchange Commission filing and noting that the fund had shrunk. PIMCO declined to comment.

Meanwhile, Jupiter said in June it would close its unconstrained emerging equity fund, saying it did not see "sufficient inflows from existing or new investors to make it sustainable going forward."

The latest closures come as the MSCI's emerging equity index continues its long-term underperformance of the broader global index; emerging stocks are up 15% in the past six months, compared with gains of 20% among global peers. 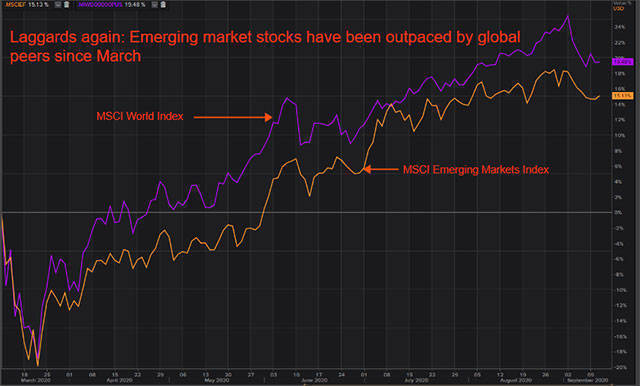 Emerging debt returns also trail German and U.S. government bonds and have done since the end of March. And the average local currency debt yield has fallen below that on less risky emerging dollar debt.

This all conspires to dim the appeal of the sector, especially as many emerging currencies have struggled. Turkey's lira has plummeted to record lows and Russia's rouble has been rocked by oil prices and the threat of more sanctions.

Aside from China, which has bounced back from the virus shock, a recovery in India, South Africa and much of Latin America is at an early stage, Goldman Sachs told clients.

Many funds also struggle with scale.

Just under half of the roughly 600 Europe-based emerging equity funds tracked by Morningstar have less than 100 million euros ($119 million) of assets under management, said Caquineau.

"The economic equation just doesn't work for a lot of these funds and a lot are being closed as probably they're not profitable or asset managers don't see a reversal of flows," he said.