Don’t buy Yahoo - at least not yet
Advertisement

Don’t buy Yahoo - at least not yet

With great public fanfare Yahoo hired a Google executive as CEO this week.

The good news is that by all accounts Ms. Marissa Mayer is very hard working, very smart and deeply knowledgeable about all things internet. Ms. Mayer also was extremely successful at Google, which is a powerful recommendation for her skills. This has pleased a lot of people. Some have practically gushed with excitement, and have already determined this is a pivotal event destined to save Yahoo.

But, before we get carried away with ourselves, there are plenty of sound reasons to remain skeptical. Check out this chart, and I concur completely with originator Jay Yarow of Business Insider - the #1 problem at Yahoo is revenue growth: 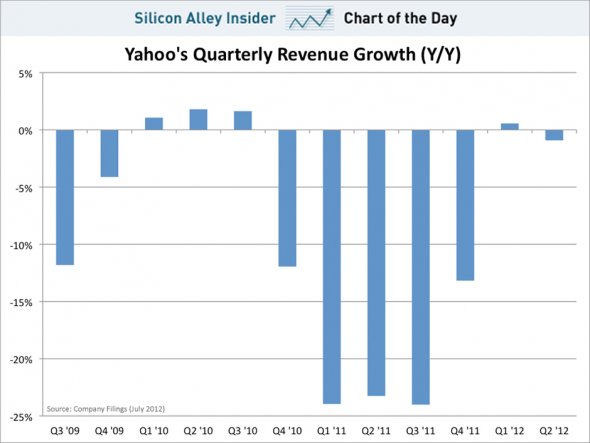 Let's not forget, this problematic slide occurred under the last person who had great tech industry credentials, deep experience and a ton of smarts; Carol Bartz. She was the last Yahoo CEO who was brought in with great fanfare and expectations of better things after being the wildly successful CEO of AutoCad. Only things didn't go so well and she was unceremoniously fired amidst much acrimony.

So, like they say on financial documents, past performance is not necessarily an indicator of future performance.

What Yahoo needs is to become relevant again. It has lost the competition in search, and search ads, to Google. It is not really competitive in banner ads with leader Facebook, and strong competitor Google. It is no longer leads in image sharing which has gone to Pinterest. It has no game in local coupons and marketing which is being driven by GroupOn and Yelp. For a company that pioneered the internet, and once led in so many ways, Yahoo has lost relevancy as new entrants have clobbered it on all fronts.

Because it has fallen so far behind, it is ridiculous to think Yahoo will catch up and surpass the industry leaders in existing markets. No CEO, regarless of their historical success and skills, can pull off that trick. The only hope for Yahoo is to find entirely new markets where it can once again pioneer new solutions that do not go head-to-head with existing leaders. Yahoo must meet emerging, unmet needs in new ways with new, innovative solutions that it can ride to success. Like the turn to mobile that saved the nearly dead Mac-centric Apple in 2000. Or the change to services from hardware that saved IBM in the 1990s.

Ms. Mayer's entire working career was at Google, so it is worth looking into Google's experience to see if that gives us indications of what Ms. Mayer may do.

Unfortunately, Google has been really weak at implementing new solutions which create high revenue, new markets. Google has been a wild success at search, its first product, which still generates 90% of the company's revenue.

If ever a company proved that there is a difference between innovating new products and launching successfully to create new markets it has to be Google.

So is Yahoo destined to fail? No. As previously mentioned, Apple and IBM both registered incredibly successful turnarounds. Bright people with flexible minds and leadership skills can do incredible things. But it will be up to Ms. Mayer to actually shed some of that Google history - fast.

At Google Ms. Mayer was employee #20 on a veritable rocket ship. The challenge at Google was to keep being better and better at search, and ads associated with search. And developing products, like GMail, that continued to tie people to Google search. It was hard work, but it was all about making Google better at what it had always done, executing sustaining innovations to keep Google ahead in a rapidly growing marketplace.

Yahoo is NOT Google, and has a very different set of needs.

Yahoo is in far worse shape now than when Ms. Bartz came in as the technical wonderkind to turn it around last time. Ms. Mayer takes the reigns of a company going in the wrong direction (losing revenues) with fewer people, fewer resources, weaker market position on its primary products and a weakening brand. Hopefully she's as smart as many people say she is and acts quickly to find those new markets with products fulfilling unmet needs. Or she's likely to end up turning out the lights at the company where Ms. Bartz dimmed them significantly.