The death of RSS 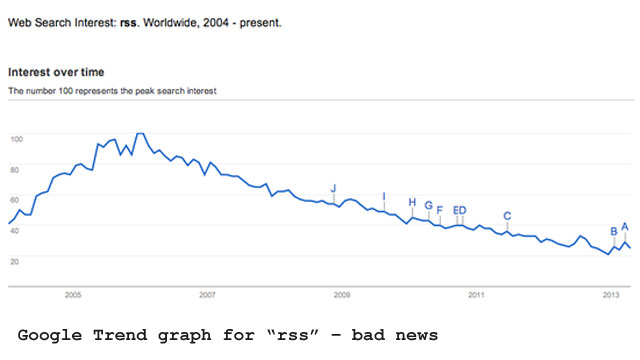 I recently wrote a blog post about moving all my RSS readers to email subscriptions, and I immediately got 30+ negative comments on it. Obviously it struck a cord. I still believe what I said, and here’s some more data and reasoning to back it up:

RSS has been dying for years

First off, the image above is the Google Trends search on “rss” over the last few years. That tells you how many people are searching for RSS on Google. To me, that’s the best indication that as a consumer-facing technology, there’s been waning interest for years. Does any blog want to bet on that as a long-term trend? Combine that with the imminent shutdown of Google Reader, and you can guess that a lot of folks using RSS readers will move to non-consumption rather than switching to an alternative. Yes, there will always be a vocal minority that loves feed readers, ultimately RSS will be more like QR codes or Segways than a mainstream technology.

Ultimately, my bet is that RSS will stick around but more as a way for content services to talk to each other – you’ll see random blogs appear in places like Flipboard or Zite automatically – but the idea that people will see the little orange RSS button and click on it is a lost cause. (Oh, and searches for “google reader” don’t fare well either)

RSS doesn’t have a reply function

Interactivity between a writer and their audience is is one of the most rewarding aspects of maintaining a blog. RSS was meant to be a different way to present content, and doesn’t have identity or interactivity baked in. One of the best aspects of email subscriptions (and Twitter) is that you can actually see who’s taken interest in your work. You can even reach out to them and start a friendly conversation. Some of the most important relationships in my career have been made over email and Twitter.

As I switch over to emphasize email, my hope is that I can increase the level of interactivity with my audience. The way its set up now, if you hit reply to any email post, write a quick note, it’ll go directly into my inbox unfiltered. And better yet, we might even have an intelligent conversation!

Feedback loops let you iterate on what kinds of content resonate with your audience. Writers need feedback loops to improve their writing – everytime a new essay is emailed to my readers, I get a ton of feedback. I know exactly who and how many folks have unsubscribed. I can reply to ask them why, by writing an email. I also know how many new people have subscribed, and often look at their email domains to figure out if they’re a corporate, a startup, a VC, etc. This kind of detail helps me write better content and get to know my audience. All good stuff. And obviously RSS is just about content, and doesn’t have this kind of feedback built in.

Consumers are moving to “integrated” readers

Related to the negative trend in RSS interest, consumers have adopting other platforms instead. RSS readers were invented in a different era. Blogger, TypePad, and WordPress were created in an era where we thought of blog networks as a bunch of standalone websites, decentralized, like the internet. But it turns out that’s not as easy to use as it could be. Turns out consumers love it when they can follow, view feeds, and create content, all on the same site. This is the core of the feed-oriented homepages of Twitter, Instagram, or Tumblr – the integrated reader has won out.

The other thing I’ve noticed is that email subscribers are just stickier and more active. From my own personal data from my blog, I know that although I theoretically have 5x more RSS subscribers than email, from a traffic standpoint, the mass of RSS subscribers don’t make up for their numbers. On a per-email subscriber basis, I get about 2x the activity rate from people clicking links from RSS as compared to email.

So when it comes to the very practical question: When a blog is designed to prompt users to subscribe for future content, what should you push for? RSS or email? The answer is easy, go with email. In otherwards, in order for the numbers to work out, I’d need an RSS prompt to convert at 2x as email to get the same activity level. Given that the market size and interest in RSS is decreasing over time, and a small vocal minority uses an RSS reader, I think it’s pretty obvious where you want to go there.

Until RSS is redesigned (ha!), I repeat: RSS, I quit you. And if you have a blog, you should be thinking about this too.

(Andrew Chen is an entrepreneur and blogger based in Palo Alto, CA. He blogs here.)