The Finance Minister (FM) presented the India Union Budget 2009 in Parliament today against the backdrop of a slowing economy in which the Gross Domestic Product growth rate has decreased to 6.7 percent in financial year 2008-09 from 9 percent levels. This seems to be the roadblock which has curtailed the maneuverability for tax sops to a large extent. Foreign Institutional Investors are the key drivers of the Indian stock markets since the opening up of the investment sector in India. The income-tax proposals in the Union Budget for FIIs are keenly watched by all. The direct tax proposals in the Union Budget 2009 impacting FIIs are summarized below.

There was an expectation that the FM would reduce, if not waive, the Securities Transaction Tax (STT), a tax levy on transactions in securities carried out through Stock Exchanges. However, the FM has not proposed any amendment to the STT, but has proposed to abolish the Commodities Transaction Tax, a tax levy on commodity derivative transactions carried out on the Commodity Exchanges, with effect from April 1, 2009. Foreign Institutional Investors (FIIs) are presently not permitted to invest in India in commodity derivatives.

The new effective tax rates applicable to corporate and non-corporate FIIs on short term capital gains income for financial year 2009-2010 will be as under: 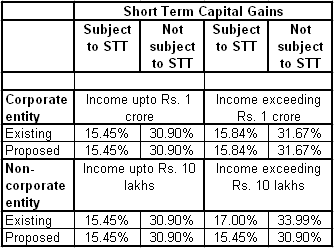 Under the existing Minimum Alternate Tax (MAT) provisions, a corporate entity is liable to tax at the rate of 10% of book profits if the income-tax computed under the other provisions of the IT Act is less than such minimum. The MAT rate is proposed to be increased to 15% from 10% of book profit. Tax paid under MAT provisions is allowed to be carried forward and set off in subsequent seven assessment years to the extent of the difference between the tax under MAT provisions and tax computed as per other provision of the Act. The period of carry forward is proposed to be increased from seven to ten assessment years.

While delivering the Budget speech in Parliament, the FM proposed to increase the threshold for non-promoter public shareholding for all listed companies in a phased manner as the average public float is less than 15 percent. This should bring cheer to the FIIs as there would be opportunity to invest in more companies with the increase in public float.