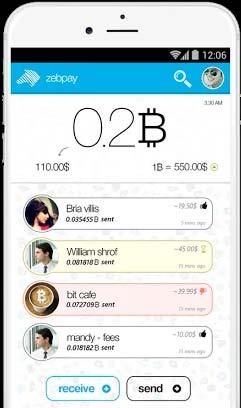 The startup, run by Zeb Ventures Pte Ltd, will use the money raised to scale up block chain-based services, improve customer service and increase headcount, it said in a statement.

“We saw a lot of promise in what was happening at Zebpay and the founders also demonstrated a perfect combination of tech and business acumen,” said Arjun Handa, CMD and vice-chairman of Claris Life Sciences.

“India is perfectly placed for big-time adoption of bitcoin and blockchain technology. Also, bitcoin could very well be the answer for a first truly global currency and has a lot of potential in the space of payments, remittance and micropayments,” Saurabh Agrawal, co-founder of Zebpay, told Techcircle.in.

Founded in 2014 by Saurabh Agrawal, Sandeep Goenka and Mahin Gupta, Zebpay is a mobile bitcoin wallet that allows its users to buy and sell bitcoins, to store bitcoins and also use bitcoins to buy e-commerce site vouchers and recharge mobile airtime across India. It was started by Gupta in 2012 as BuySellBitco.in and was re-branded as Zeb IT Service Pvt Ltd in 2014. Headquartered in Singapore, the company also has an office in Ahmedabad.

Agrawal is the founder and chairman of event management company Red Events while Goenka is former joint managing director of Hemlines, a textile export company and founder of Blynk, hotel concierge app.

A mobile-only platform with over 25,000 users, Zebpay hopes to bring this number to 1 lakh by the end of this year. Zebpay is available on both Android and iOS platforms.

“We are currently doing a revenue run rate of Rs 240 crore and hope to achieve the Rs 500 crore mark by the end of this year,” Agarwal said.

Zebpay has also set up a dedicated blockchain lab and is working with a few government sections in providing blockchain technology based solutions which can save redundant expenses.

“Governments worldwide have acknowledged that blockchain technology has potential to disrupt current financial systems and are exploring ways to benefit from it. Blockchain technology can prove to be a great tool in tackling counterfeiting and authentication of documents and we are working with a few government bodies in Gujarat in this regard,” said Agrawal.

Some of the potential applications of blockchain technology are increasing efficiency in e-governance, authentication of marksheets and in issuing driving licenses.

Going forward, the company plans to introduce global mobile airtime, global voucher integration and payment gateway integration by the end of 2017 and hopes to expand across geographies.

Bitcoin, which was launched in 2009, is often described as the first crypto currency, even though prior systems existed. Crypto currency means money that is made hidden and private—and therefore secure—by means of encryption, or coding. Blockchain is the technology behind crypto currencies.