300 Gather At VCCircle Forum In Hyderabad 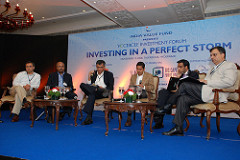 VCCircle Investment Forum in Hyderabad successfully concluded on Thursday, November 13, 2008. The event - themed Investing In A Perfect Storm - saw the confluence of about 300 attendees and about 20 speakers from the private equity and investment banking industry. This was one of the largest private equity gatherings in the city and even in these times of despair in general, the mood of optimism was palpable at the ball room in Taj Krishna. 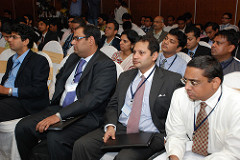 The key conclusion of the one day conference is that the economy will go through cycles, but private equity is here to stay. So there are several funds sitting with capital waiting to deploy money. Its about finding the right company at right valuations reflecting the economic realities.

The speakers - most of them have seen several economic cycles in their career - believed that the best investments are those made at the bottom of a cycle. What is key for the companies are that they need to survive the downturn and for that they need capital. "This is not about the survival of the fittest, but about the survival of the most capitalised," said Atul Kapur, Managing Director, Indivision Capital. 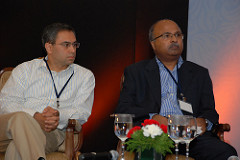 Kapur added that the "fast moving dump capital" which was readily available an year back is not there anymore, which is a good thing. According to him, in the market, anyone who has the access to capital in the current environment has competitive advantage.

The global financial crisis has flushed out the fast moving dumb capital. This has resulted in a situation where only good companies get funded. For PE funds, this is the best time to do value shopping. "We are doing price shopping with various entrepreneurs, but we will make sure that the entrepreneurs have the opportunity to get their money back," said Gopal Srinivasan, Chairman of TVS-Shriram Growth Fund, which recently raised a Rs 600 crore fund completely from domestic investors. 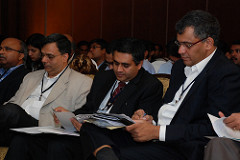 However, not much has changed over the venture side and the valuations in the early stage have not been of much consequence as much it is on the private equity side. "The early stage ventures have not seen much of an effect, and there are a lot of second time entrepreneurs who are starting out," said Sudhir Sethi, MD, IDG Ventures. Sethi also added that with the investor capital becoming cautious and scarce, the entrepreneurs have to focus more on demonstrating excellent revenues to secure a late stage of series A funding."

TVS's Srinivasan said the crisis can have a serious impact on SMEs. He said his own group TVS has issued a circular internally to do weekly P&L statements, daily meetings of the team, revision of non-core expenditure plans, and so on. However, he said that the companies should continue to make core investments. "Else the company will be wiped out by the time the crisis gets over." 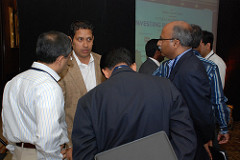 In difficult times, the speakers agreed that they will have to establish market leaders in their portfolio with a demonstrable track record for revenues and earning growth. They are the only ways to secure a profitable exit. "It's not the good time to exit, but to hold on to the portfolio companies," said George Thomas, Patner, India Value Fund Advisors.

The fund raising environment is getting tougher as the exits are becoming scarce. The connection is that the pension funds in the US are not getting their money back from the funds they have invested in while they still need to pay their pensioners. So the funds who are in the market to raise capital are not getting such an enthusiastic response, according to IDG's Sethi.

Moreover, limited partners are now more demanding than they were. "Funds have to do a lot of homework. LP's are also taking longer to invest in a fund. They are demanding more information than before," said  Mukund Krishnaswamy, MD, LightHouse Funds. 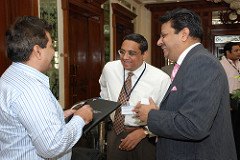 Coming from the public equity side, Praveen Chakravarty, COO, BNP Paribas, said, " There remains a huge disconnect between the representation of the country's fundamentals or GDP numbers and the actual fundamentals. The outflows will continue to increase and there will be a further bottoming out."

Chakravarty added that a great opportunity is awaiting private equity and distressed investors who were already sitting on piles of cash just waiting to be deployed into high-quality investments.