Which IT top gun has the most obscene pay gap with the median worker? No, not Sikka!

If the controversy surrounding the sacking of former Tata Sons Ltd chief Cyrus Mistry caught the country’s attention in 2016, this year, the spat between the top management and board of directors at IT major Infosys Ltd and its founders, seems to be hogging the limelight.

Apart from issues of corporate governance raised by Infosys founders NR Narayana Murthy, Nandan Nilekani and Kris Gopalakrishnan, at the heart of the imbroglio was the compensation for chief executive officer Vishal Sikka and a severance package paid to former chief financial officer Rajiv Bansal.

Sikka’s annual compensation has been increased from $7.1 million to $11 million effective

January 2017, according to media reports. Bansal walked away with 24 months’ of severance amounting to Rs 23.02 crore last year, according to the company’s annual report.

But where does Sikka stand compared to other top bosses at India’s largest IT companies?

VCCircle trawled through the annual reports for 2015-16 of the 10 biggest IT firms by market capitalisation, and took into consideration their total remuneration, including stock options, both in absolute and relative terms to ascertain who among them really were the best-paid. 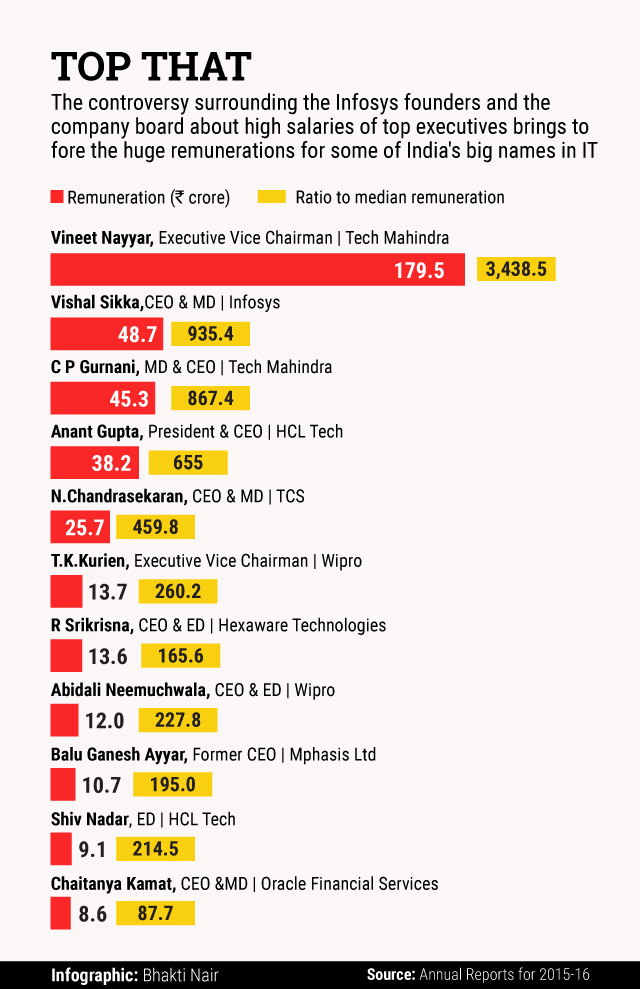 It turns out that in 2015-16, while Sikka was indeed among the highest-paid executives, he was pipped to the top spot by Tech Mahindra Ltd’s executive vice-chairman Vineet Nayyar, who earned more than three-and-a-half times that amount.

In fact, Nayyar bettered Sikka on a relative basis, too, getting paid more than 3,400 times the median salary, while the latter clocked 935 times.

It turns out that Tech Mahindra is a generous paymaster when it comes to top management positions, as its managing director and chief executive officer CP Gurnani earned just a shade lower than Sikka.

The only other company whose two executives figure among the highest grossers, is HCL Technologies.

Interestingly, N. Chndrasekaran, who recently replaced Mistry as the Tata Group chief, was only the fifth highest paid among his peers, despite heading the country’s largest IT company Tata Consultancy Services (TCS).