Investments in emerging technologies such as Web3 and cryptocurrency increased to over $500 million in 2021 from $20 million in the previous year even as consumer technology, fintech, and software-as-a-service (SaaS) continued to account for a substantial pie of the total venture capital (VC) investments by value, according to a Bain & Co report.

Notably, the share of the VC deal value within the cumulative private equity and venture capital investments reached more than 50% for the first time, it added.

In terms of sectors, consumer technology, fintech, and SaaS continued to account for over 75% of all VC investments by value in line with the previous year, it added. 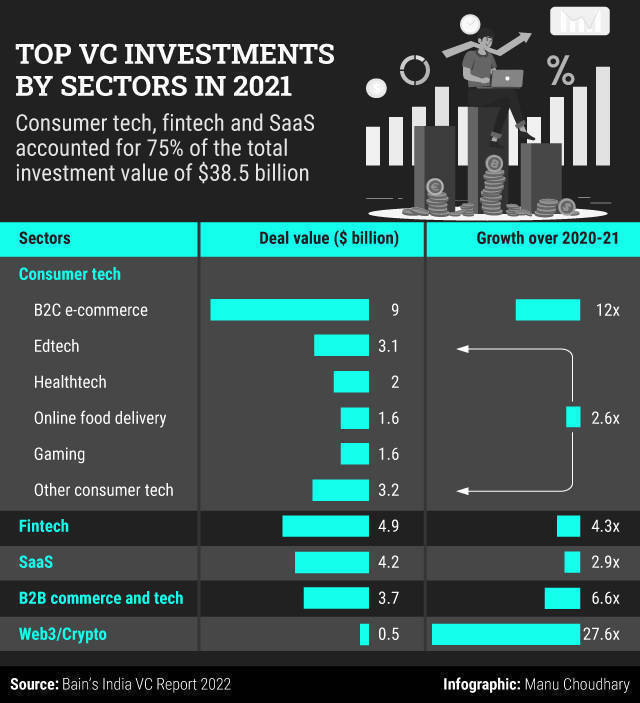 However, 2021 was differentiated in terms of a sharp rise in investments in emerging technologies, such as business-to-business (B2B) commerce and tech, and Web3 or cryptocurrency-based startups.

B2B commerce and tech investment grew 6.6x to $3.7 billion in 2021, driven by an inflection in digital adoption post Covid‐19 in fragmented B2B supply chains, it said.

Web3 and cryptocurrency deals saw a big surge last year and is expected to see continued investor interest this year as well, especially with the Indian government’s ruling on validity of digital assets, the report noted.

In the NFT space, Kalaari Capital made its first bet last year with its investment in GuardianLink.io. In the second half of 2021, Sequoia Capital India, the most active VC investor in India, made 19 investments in Web3 startups, Rajan Anandan, managing director at the VC firm said at the Hindustan Times Leadership Summit last year.

Notably, earlier this month, US-based venture capital firm Bessemer Venture Partners, which has invested in Indian startups such as PharmEasy, BigBasket, and Swiggy, launched a $250 million fund dedicated to the cryptocurrency space as it seeks to sharpen its focus on the industry as it matures.

Consumer tech deals was primarily driven by the 12x jump in investment value to $9 billion of the business-to-customer (B2C) e-commerce segment. Flipkart's total fundraise of $3.6 billion and Meesho's fundraise of $570 million accounted for more than 40% share of B2C e-commerce transaction last year.

Funding in the SaaS jumped 3x to $4.2 billion in 2021 with Freshworks' initial public offering (IPO) on the Nasdaq becoming the highlight. Besides, other SaaS players such as Postman, BrowserStack and  Chargebee also raised significant funding last year, strengthening India originated companies' position on the global SaaS stage.

"Fintech’s record funding in 2021 was headlined by significant share led by consumer and SMB-focused neobanks—customer pain points in terms of digital access, transparency, and credit are key factors of a massive opportunity for upcoming new-age banks," it explained.

Indices flat in early trade but set for weekly gain