Investors have a mixed relationship with risk, forgetting that it exists in the good times and obsessing about in bad times, and nowhere is this dysfunction more visible than in emerging markets. After a few years where investors seemed convinced that emerging markets were no riskier than developed markets, they seem to have woken up to the existence of risk in emerging markets, with a vengeance, in the last few months. As emerging markets around the world have been pummeled, analysts have sought to assign blame. Some have pointed the finger at the Federal Reserve, claiming that mixed signals on quantitative easing and the steep rise in US interest rates have caused currency and market fluctuations globally. Others attribute dropping stock prices to slowing economic growth in the largest emerging markets, with China at the top of the list. There are a few who point to the rise of country-specific political factors, with governments in Brazil and Egypt facing pressure from their populace.

If you accept this proposition, it follows that you cannot value or invest in companies with emerging market risk exposures without having estimates of risk premiums by country. At the start of each year, for the last two decades, I have put up my estimates of risk premiums, by country, on my website. For the last three years, in response to the rapid intra-year shifts in country risk, I have also done mid-year updates. After the turmoil of the last few weeks, I decided that this would be a good time for a mid-year country risk update.

The most easily accessible data on country risk takes the form of sovereign default risk measures. While ratings agencies have been assigning ratings to sovereign bonds issued by countries for decades, the growth of the credit default swap (CDS) markets have given us access to CDS spreads for a subset of these countries.

Ratings agencies have been critiqued since the banking crisis of 2008 for being being biased (in favor of issuers) and overlooking major risks, but I think the bigger problem with them is that they are slow in reacting to change. That effectively makes sovereign ratings into lagging indicators of country risk. 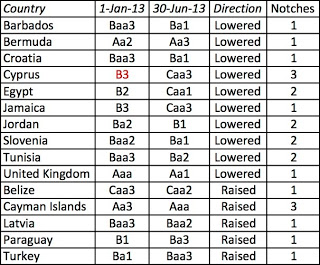 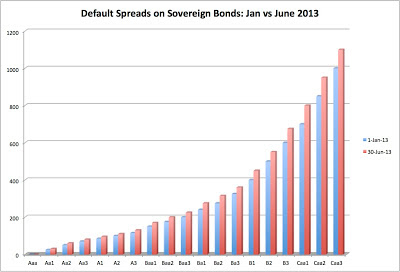 Sovereign default spreads are about 10-15% higher than they were six months for most of the ratings classes.

The credit default swap market is a quasi-insurance market, where investors can insure against country default risk; thus the CDS spread of 2.50% for Brazil at the end of June 2013 can be viewed loosely as the annual cost of insuring against default on a Brazilian US$ denominated government. While I have posted on the limitations of the CDS market, it does have one significant advantage over the sovereign rating process. It can and does react (sometimes too much in the view of its critics) instantaneously to events unfolding in real time in individual countries. As a consequence, it is much more volatile than ratings-based measures of default risk.

Looking at the changes over the six months, the ten countries that saw the biggest percentage increases and decreases in spreads are listed below:

Thus, Brazil, which did not see any change in its sovereign local currency rating between January and June 2013, did see a 74% increase in its CDS spread, reflecting the political unrest of the last few weeks. Interestingly, every one of the ten countries that saw the biggest percentage increases was an emerging market, with six of the top ten countries on the list coming from Latin America. On the list of companies that saw the biggest decreases in CDS spreads, eight were developed markets with only two emerging markets (Costa Rica and Romania) making this list. If nothing else, this table indicates that in the market's view, the divergence in risk between developed and emerging markets widened over the period.

There are some who view both sovereign ratings and CDS as too narrow in their focus of debt. A country that has little exposure to default risk can still be exposed to other types of risk. There are services that try to provide more comprehensive measures of country risk, encompassing economic, political and legal risks. Political Risk Services (PRS), for instance, provides measures of country risk on different dimensions as well as a composite measure of country risk. These scores are numerical, with higher scores indicating safer countries and lower scores signaling more risk.

Since the PRS scores are proprietary, I cannot provide the entire list, though you can buy the list, as I did, on the PRS website for about $120. However, I did compute the percentage changes in PRS scores from January to June 2013 and discovered as with ratings agencies, that country risk scores tended to be sticky and changed relatively little. There was no change in the median PRS score between January and June 2013 and the average PRS score median (average) changed by only -0.19%, indicating a very mild increase in overall risk across the countries. In the table below, I highlight the ten countries that saw the biggest increases and decreases in risk based upon the PRS scores between January and June (Again, remember that a lower number indicates more risk and a higher number is less risk):

Almost all of the countries on both lists are emerging markets, which is to be expected since you would expect the biggest volatility in risk scores in these countries. Thus, Latin American and African countries dominate both the “increased risk” and “decreased risk” lists, with this measure.

While default risk measures can be used to price sovereign government bonds, it is an open question as to whether they should affect or be used in equity pricing. While there are some who argue that country risk should be diversifiable to a global equity investor, the increasing correlation across countries has made that argument difficult to defend. I believe that equity risk premiums vary across countries and that the variation is correlated with the default spreads for these countries. In fact, I posted on country risk premiums and the different approaches for estimating country equity risk premiums a year ago, when I made my mid-year update for the 2012 data.

I use a two-step approach to estimating country risk premiums (CRP) for markets where I start with the default spread for country in question (obtained either from the sovereign rating or the sovereign CDS) and scale up that spread for the higher risk in equity markets.

Updating the sovereign default spreads to June 2013 and applying the relative equity risk multiple to these spreads, I get the updated equity and country risk premiums for much of the world. To get a sense of how the risks vary across the world, I created a global heat map of equity risk premiums (To be honest, even if you learn nothing from them, heat maps look cool.): 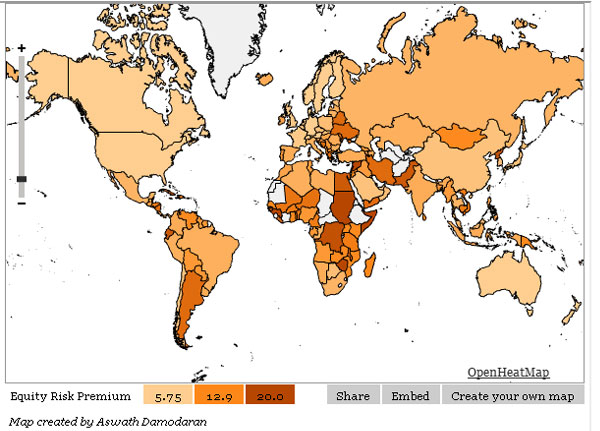 You can download the spreadsheet that contains the equity risk premiums by country by clicking here. I have added a lookup sheet to the spreadsheet, where you can pick any of the 135 countries for which I have data and pull up sovereign ratings, CDS spreads and my estimates of risk premiums. I hope you find it useful.

What can we learn from the sifting of these various measures of country risk over the last six month? Overall, while investors don't seem to think that the world as a whole is riskier than it was six months ago, their perception of where the risk is coming from has changed. They believe, rightly or wrongly, that more of the risk in the future will come from emerging markets rather than developed ones. While this is a break in the trend over the last five years, when risk premiums in developed and emerging markets converged, it is a shift back towards a pre-2008 world, when the risk differences between developed and emerging markets was stark.

As investors, there are three big questions that we face that are related to the risk shift that we are seeing globally. The first is whether the adjustment is complete or ongoing; if it is ongoing, that would imply more pain to come in emerging markets and argue for shifting money from emerging to developed markets for the near future. The second is whether the stock price adjustments that have already occurred in emerging markets are commensurate with the risk shift. If stock prices have dropped too much (little), given the risk reassessment, it would be a good (bad) time to be in emerging market stocks. That will require more than an off-the-cuff judgment and I will look at it more closely in my next post. The third is whether individual companies with global operations are being priced correctly, as country risk assessments change. In past crises where emerging markets have become more risky, global companies that are based in these markets have often seen their stock prices drop too much. I will look at this question as well in a future post.

Developed versus Emerging Markets: A converging or diverging world? (Still to come)