Well begun is half done, goes the saying. For the Indian economy, 2015 will be a year that began well but when work remained only half done.

The year can be divided in two distinct phases. The first phase lasted until the end of the first quarter and was marked by a bullish attitude that drove stock markets higher as investors put more faith in the economy. Then, reality struck and global factors as well as waning investor interest weighed on sentiment.

The year gone by also saw some major initiatives such as Make in India, smart cities and Digital India gaining traction under the new government. However, these programmes are in their infancy and it is still too early to say when, and if at all, they can make a big difference to the economy.

The government started the year by announcing a growth-focused budget and even met its fiscal targets. But it missed out on some major reforms.

While it manoeuvred successfully during the budget session, everything went downhill thereafter. Little work was done in the monsoon and winter sessions due to constant disruptions in the Rajya Sabha -- where the government lacks majority -- over bills on land acquisition and Goods and Services Tax. 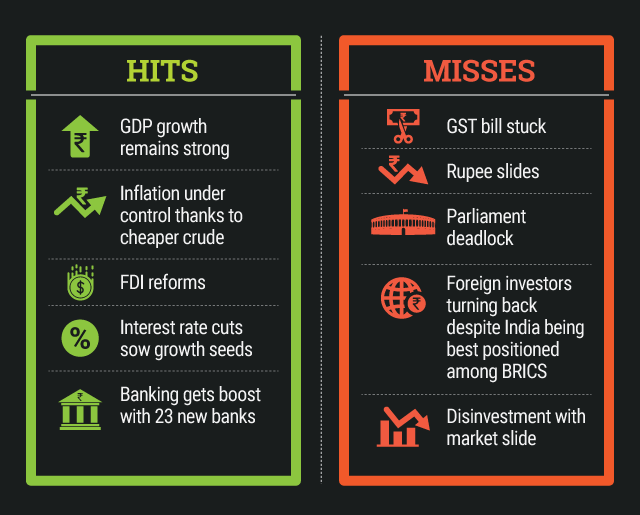 Uncertainty over reforms after the land bill was withdrawn and a delay in passage of the GST bill clouded the government’s ability to push through important measures while inaction and ambiguity over the minimum alternative tax and other taxes prompted investors to pull money out of the economy.

A new dawn for banking

The Reserve Bank of India remained busy through the year. The biggest development in the banking sector came in the form of two new bank licences after a decade-long gap. The RBI also awarded 11 licences for payments bank and 10 for small finance banks in a bid to expand the coverage of financial services.

The central bank also cut interest rates four times, by a total of 125 basis points, this year to accelerate growth as a slump in global commodity prices helped inflation stay under control. Though the monetary easing helped boost confidence, banks’ reluctance to pass on the rate cuts restricted credit growth to single digits for the year. The RBI and the government also agreed to form a monetary policy committee during the year.

Growth in gross domestic product for the January-March quarter came in at 7.5 per cent, helping India become the fastest-growing major economy by overtake a slowing China. While growth was propelled by a change in the method of calculation and setting of 2012 as base year, data also showed industrial output is far from recovery.

The economy grew 7 per cent in the second quarter of 2015 but regained some traction in the third quarter, expanding at 7.4 per cent. The government also recognised the reality and cut its GDP growth estimate to 7-7.5 per cent in the mid-year review from its earlier forecast of 8.1-8.5 per cent.

Consumer inflation remained below the RBI’s target of 6 per cent by January 2016, though there were a few hiccups as prices of pulses soared.

One of the government’s biggest achievements was relaxing foreign direct investment norms in 15 sectors. Its decision to open up insurance has prompted nearly a dozen foreign investors to pump in more money in their local ventures.

In media, one of the major changes was allowing 100 per cent FDI in parts of the broadcasting segment (up to 49 per cent via automatic approval and through government approval for more stake) including DTH, mobile TV and cable networks. FDI approval for uplinking and downlinking of non-news TV channels has been put under automatic route. For FM radio and news TV channels, the government hiked the FDI ceiling to 49 per cent from 26 per cent.

The Bombay Stock Exchange’s benchmark Sensex crossed 28,000 at the start of the year. However, it fell below 26,000 in the latter part of the year as foreign institutions pulled money out in the run-up to the US Federal Reserve’s rate hike and after it became clear India’s economy won’t grow as fast as earlier projected.

A shaky global economy, coupled with a slowdown in China, as well as weak corporate earnings at home weighed heavily on Indian stocks.

The rupee slumped as well, touching two-year lows against the dollar.

The government was able to clear a few roadblocks to improve the ease of doing business in the economy. However, it will have an uphill task in keeping investors’ interest, especially if it fails to meet the target of GST implementation next year.

Crude prices are expected to help the government contain the current account deficit and import bill for next year but a weak rupee will erode some gains.

While the Fed’s rate hike in December provided cues to the Indian markets and the economy this year, the pace and quantum of rate hikes by the US central bank would play an important role next year as well.

At home, the road for rate cuts by the RBI seems bumpy as a hike in salaries and pensions of central government employees coupled with poor performance on the divestment front may lead to the government missing the fiscal deficit target of 3.9 per cent for this fiscal year.