PE Funds Choose Open Markets To Exit; They Are Making Money Too 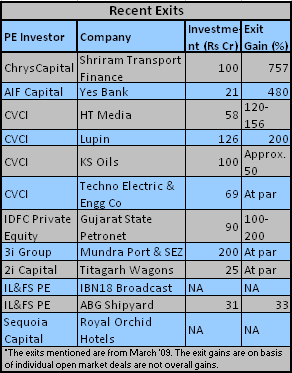 Going by the state of capital markets in the early months of 2009, it really did not look like 2009 will be the year of exits for private equity funds. But if the recent market action is any indication, this may well be the year of open market exits. Private equity funds like ChrysCapital, Citi Venture Capital International (CVCI), Sequoia Capital India, 2i Capital, IL&FS Investment Managers (IIML) and the 3i Group have sold stakes in their portfolio companies either partially or fully.

The exits started trickling down from March and hit a high pitch after the markets rallied responding to the election results of May16, 2008. Last week, ChrysCapital sold a 5% stake in Chennai-based truck financer Shriram Transport Finance Company for Rs 300 crore. It's not a distress sale, by the way. ChrysCapital has made a cool 8.5x returns from this deal. Also, AIF Capital sold its stake in Yes Bank last fortnight, making 5.8x on its investment. CVCI followed with its exit in drug maker Lupin Laboratories, making 3X returns. All these investments were done before 2005, and its seems PE funds were looking for a (relief) rally to exit them.

Indian stock markets have been on a rally since March 9 as the Sensex rose from 8,160 points to 13,913 points on May 25. On May 18, when markets opened for the first time after the election results were announced with a strong pro-reform government coming to power, the Sensex jumped by 2,100 points to 14,272 points.

It was the kind of a rally the private equity funds were looking to offload their shares. Especially, when many foreign investors have returned to the Indian markets. There was appetite for shares. "Manmohan Singh without the Left, that is the dream come true for most foreign investors," says Praveen Chakravarty, COO & Head of Institutional Equities Sales at BNP Paribas India, explaining the sudden influx of buyers into the equity markets.

Most PIPE (private investment in public equity) deals have seen significant value erosion when markets plunged in the post-Lehman Brothers bankruptcy. Since the rally, these stocks have recovered their losses. “Expectations are that this is again a bubble that has arisen which will readjust to a more sensible level in due course, especially before the July 31 budget comes out,” says Vikram Utamsingh, the executive director and head of Private Equity Advisory at KPMG. If a pro-reform budget with steps like easing of FDI norms and disinvestment comes, markets could rally up again.

Also, most of the exits have been made from investments done between 2004 and early 2006 before the mad rush started. So, even if some of these exits were not able to make profits, they were still in green. “The funds that invested in 2006 and 2007, their exit point will still be below their cost,” said CG Srividya, Partner, Specialist Advisory Services, Grant Thornton India.

However, the fact is some of the exits have been made at good multiples, contrary to what most people in the private equity industry did not believe in the beginning of 2009. Also, some of these exits may have been planned for last year, but did not go through due to the dramatic fall in markets. “Last year there were very few exits, valuations weren’t what were expected. In fact some of these funds have also shown impairment in their reporting,” said Srividya. Because there were not many exits last year, some of these funds maybe holding portfolios larger than they had planned.

“These funds also have large portfolios, and it makes sense for them to dilute on an ongoing basis,” adds Utamsingh. While CVCI is believed to have a portfolio of 30 companies, ChrysCapital also holds stake in more than two dozen companies. Sequoia and IIML also have huge portfolios.

Since most of these were part exits, PE investors maybe looking to get back the amount they invested. “Some of these people have holdings since 2005-06, and if anything, they would like to come out with their cost so that what remains in the company is pure profit,” said Utamsingh.

There have also been some quick flips in the market too. While Standard Chartered Private Equity (SCPE) has invested further to average its investment in Mahindra Financial Services and ABG Shipyard, it also sold half of its stake in Karur Vysya Bank. The sale came just three months after it picked up a 4.42% stake from open markets in February for a sum of Rs 47.43 crore. While the fund entered at Rs 198, it has sold the stake for Rs 265 in the post-election results rally.

However, the investments made in the later part of 2006 or 2007 haven’t made for good exits. Take the example of CVCI’s part exit of Techno Electric & Engg Co, a Kolkata-based engineering, procurement and construction (EPC) firm focused on the power sector. CVCI sold a 4.96% stake in the firm for a share price of Rs 72, while its entry point was at Rs 70. This investment was done in October 2006.

You win some and lose some, but private equity funds will now have an exit track record to show when they go back shopping for funds to their investors next time.