Data collated by VCCircle from disclosures on management compensation in banks' annual reports show that, barring Kotak Mahindra Bank, other top private banks offered 20-30% pay hike on cash compensation to their CEOs in 2015-16 compared with the year before.

This pay hike excludes the value of employee stock options, or ESOPs, which vary based on an individual's decision to exercise the rights. It is also not a direct reflection of remuneration for a particular year, though this is part of the total pay package.

For instance, Aditya Puri, the managing director of HDFC Bank who was the CEO of Citibank Malaysia prior to joining the Indian lender two decades ago, pocketed a hefty 31.6% hike (excluding stock options exercised) to Rs 9.73 crore. Although he climbed a spot to become the highest-paid banker, his total pay packet declined marginally to Rs 31.53 crore since he exercised fewer stock options.

Interestingly, the second-highest-paid banker based on non-ESOP compensation is not the CEO at any of HDFC Bank's peers. He is Rajat Monga, CFO at YES Bank. Monga got a hike of almost 17% and took home Rs 7.96 crore.

Bish Agarwal, chairman of headhunting firm Stanton Chase India, said private-sector bankers are paid as per the performance of their respective banks. “It is quite normal to get 20-30% pay hike and some of them could get much more,” he said.

However, the pay hike was higher than the 9.4% projection for financial services companies for 2015-16 by global human resources consultancy Aon Hewitt. The consultancy estimates the average pay hike at finance companies to be 8.8% and the average across sectors to be 10.3% this year.

In terms of the total pay packet, K Ramkumar, a former executive director at ICICI Bank who once headed its HR unit and quit recently, was the highest-paid banker with remuneration of Rs 34.5 crore (including stock options exercised) in FY15 (click here for the previous year's top-paid bankers). Devoid of stock options, he fell down the charts last year.

While HDFC Bank's Puri took the pole position in terms of both cash component and total remuneration including stock options, his number two at the bank, Paresh Sukthankar, moved up to take the second spot with a total pay packet of Rs 18.9 crore, almost the same as the previous year. 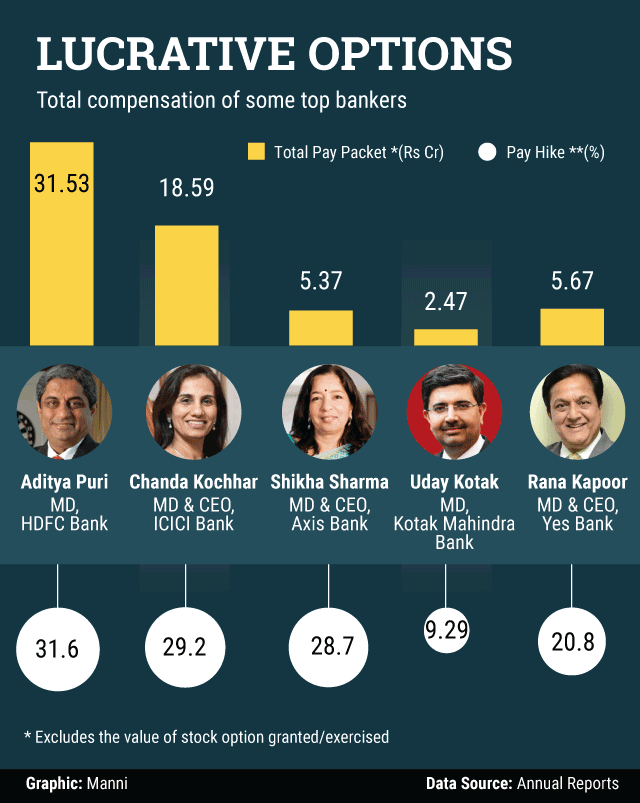 Chanda Kochhar, MD and CEO at ICICI Bank, came next thanks to a big jump in the value of stock options she exercised last year. She also got a spiffy pay hike despite the bank seeing lower profits for the year due to higher provisioning for bad loans.

The list does not include the Indian arms of foreign banks and privately held investment banks where compensation is spread across a smaller team and is dependent on deals or, more particularly, deal sizes.