State-run Indian Railway Catering and Tourism Corp. (IRCTC), which provides online ticketing services for the world’s fourth-biggest rail network, made a stellar debut on the stock exchanges on Monday with its shares doubling from the issue price.

Shares of IRCTC began trading at Rs 644 apiece on the BSE, up 101.25% from the initial public offering price, before clocking more gains to touch a high of Rs 743.80.

This is the highest debut-day gain by a company listing on a main board of the stock exchanges.

Previously, Avenue Supermarts Ltd — the operator of hypermarket chain D-Mart owned by ace stock market investor Radhakishan Damani, had clocked a jump of 114% on its opening day in March 2017, prompting more companies to go public and 2017 became a record year for IPOs. 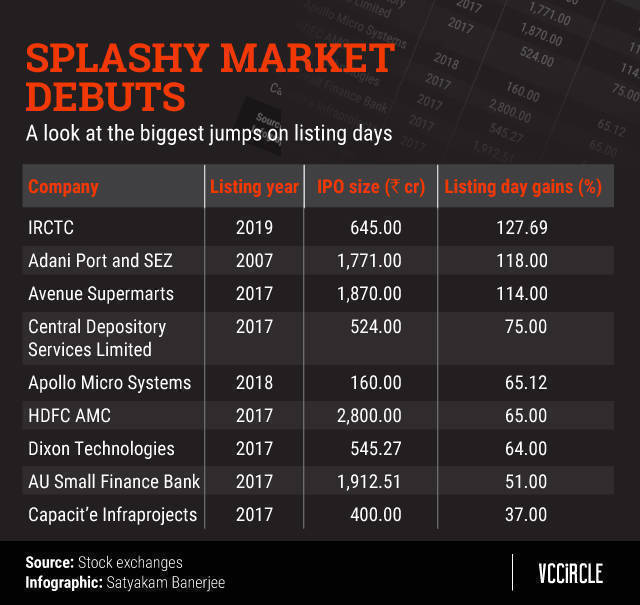 Prior to D-Mart, Adani Port and Special Economic Zones Ltd’s debut in November 2007 clocked a jump of 118% on its listing day.

IRCTC's stellar debut follows an IPO that was subscribed more than 100 times with heavy demand from all categories of investors.

It is the 12th company to list on the main board of the stock exchanges this year. Five of the previous 11 companies have made strong debuts while four tanked and two others ended flat after losing initial gains.

IRCTC now commands a market capitalisation Rs 11,657.60 crore as against a valuation of Rs 5,120 crore ($721 million) it sought through the public offering.

The government fetched about Rs 640 crore by selling shares at the upper end of the Rs 315-320 price band. The sale is part of the government’s disinvestment programme.

The government will get three years from the listing date to bring its stake down to 75% or below as per the minimum public shareholding norms for listed companies.

The company had filed its draft prospectus in August and received approval from the capital markets regulator on September 17. VCCircle had first reported about IRCTC’s IPO plans and merchant banker appointment in May 2017.

Incorporated in September 1999, IRCTC is the sole catering services provider and online ticketing platform to the Indian Railways. It also sells packaged drinking water at railway stations and on trains, and offers travel packages.

IRCTC is Asia’s busiest and world’s second-most-active website, with an average 15-18 million people transacting per month for the quarter ended June 2019.