Foreign investors turned net buyers of Indian equities as slowing COVID-19 cases boosted hopes of a faster economic recovery from pandemic lows, while other Asian equities faced outflows on caution ahead of the U.S. presidential election.

According to stock exchange data, Indian shares witnessed inflows worth $2.66 billion in October, after seeing an outflow of about $1 billion in the previous month.

On the other hand, South Korea, Taiwan, Philippines, Thailand, Indonesia and Vietamese equities faced a combined outflow of $2.3 billion, the data showed.

Over the past month, India's benchmark Nifty index has risen about 4%, compared with MSCI Asia ex-Japan index's gain of 2.9%. 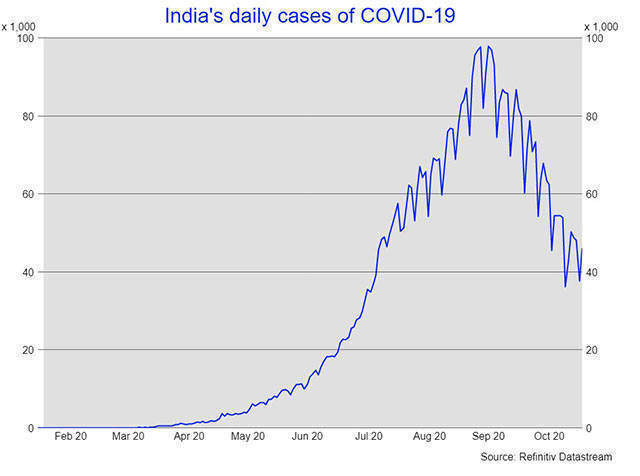 Thai equities, which have shed 22.7% this year to mark the biggest fall among major world stock indexes, witnessed an outflow of $700 million in October on concerns over the ongoing anti-government protests.

Overall, investors were wary ahead of the U.S. presidential elections, as the prospect of no immediate winner in the race would adversely affect regional markets and risk sentiment

"The base case scenario of a Democratic sweep, as indicated by opinion polls, would intuitively be positive for risk assets, one that goes hand-in-hand with further foreign inflows for Asia," said Jingyi Pan, a Singapore-based market strategist at financial services firm IG.

"That said, there exists risks given potentially prolonged indetermination of the results due to early voting and also a possibility of contest of the results."

U.S. President Donald Trump has repeatedly refused to commit to a peaceful transfer of power if the vote count indicates he has lost to Democratic challenger Joe Biden.

Share markets veered higher in wild Asian trading on Wednesday as results from the U.S. presidential election proved far closer than polls had predicted, leaving the outcome deeply in doubt.