Impact funds invested over $1 billion (Rs 6,400 crore) in India for the second consecutive year in 2016, helped by a jump in the average deal size even as volumes remained flat, according to a report by consulting firm McKinsey.

The value of impact investments had hit the $1-billion mark for the first time in 2015, and it was a shade better last year at $1.1 billion, the report said.

The total value of impact investments between 2010 and 2016 was around $5.2 billion, with the market attracting more than 50 active impact funds, the report said. Impact investments in the country have the potential to grow 20-25% a year to touch $6-8 billion annually by 2025, it added.

“Investors around the world are seeking opportunities in socially responsible and purpose-driven projects. India is an attractive market with a large population and several social measures under stress, a government motivated to bridge social gaps and supportive of policy changes, and underlying economic growth and stable financial markets," said Vivek Pandit, senior partner and global co-leader of McKinsey’s private equity practice.

Financial inclusion and clean energy were the most attractive sectors for investors, accounting for 43% and 21%, respectively, of the investments last year.

Notably, investments in clean energy—wind, solar, and small hydro-power generation—had dominated impact investing in India in 2010. However, their share fell to roughly 40% of the total deal value in 2014-16 from 60% in 2011-13, mainly because of an increase in both volume and value contribution from the micro-finance sector, the report noted.

In terms of volume growth, too, there is increasing diversification with sectors such as education, healthcare, and agriculture growing during the period. Financial inclusion and clean energy accounted for 64% of the deal volume in 2016, compared with 88% of the total in 2010.

"This shows investors are finding investable business models and enterprises in sectors previously considered unattractive from a scale or returns perspective," the report noted. 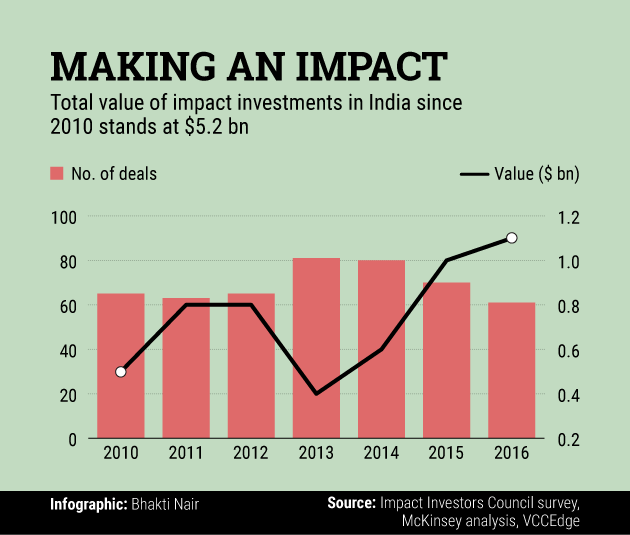 Club deals, wherein a private equity or venture capital firm invests in partnership with impact investors, are becoming popular. In 2010, club deals accounted for $130 million of investment, a number that has risen to $240 million in 2016.

On returns, the report said impact investments in India have demonstrated the ability to employ capital sustainably while meeting the financial expectations of investors. McKinsey's assessment of 48 exits between 2010 and 2015 showed that the investments gave a median internal rate of return (IRR) of about 10%. The top third of deals yielded a median IRR of 34%, exceeding investors' expectations. PE firms typically chase an IRR of 20-30% in local currency terms.

The report also said that the average holding period till exit has been about five years, which is shorter than the approximately 10 years for a traditional PE fund.

“Having grown at a mean annual rate of 14% over the last six years and now touching the lives of up to 80 million people, India has proved to be a real success story for impact investing, even as it continues to grow," said Toshan Tamhane, a senior partner at McKinsey.