For FE Clean Energy, a PE fund manager based out of the US and managing four funds globally, India stands at the No.1 position from a risk-return perspective, says Anand Prakash, MD, South East Asia, FE Clean Energy Asia, which manages the third pure Asia-focussed fund and part of the fourth fund. The fund, which has already committed $75 million to India across five investments, has an appetite for investing up to $50 million and more. It is also looking to diversify its focus areas in India from hydel to bio-fuels, energy to waste and agri–based investments. In an interview with VCCircle, Prakash talks about their India strategy, expansion plans, opportunity set and the risks and rewards associated with clean energy investment. Excerpts:-

How important is the India market for you?

In clean energy, the opportunity is quiet different in each market. Certain markets have very good hydro resources while others do not. So our strategy is very customized and based on factors such as availability of renewable energy resource, government and tariff policy, access to debt finance, and quality of teams. What is uniquely attractive about India is obviously the fact that it is a growing market. And the merchant power market has opened up possibilities in a way that most others don’t have. I have been involved in India since 1994 and I have seen the quality of entrepreneurs develop and improve very dramatically in that period. Banks have a fairly good understanding of the various types of technology and are willing to lend to such projects. And last but not least many successful IPOs suggest that there is an attractive exit available.

For us India is the no 1 market compared to even China. Our latest fund V has $150 million committed to India and we also have a $100-million co-investment line, so we have enough dry powder to look at investments opportunistically. 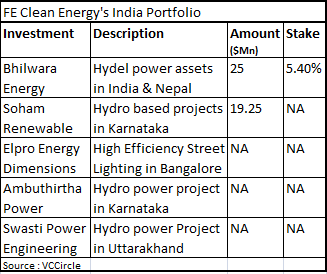 How does the clean energy value chain look like from a risk-return perspective?

I would put hydro as very attractive, solar has an interesting economic dimension to it where the tariffs are high but capital costs are falling dramatically. In a year or two, people could make a fairly nice return even though right now it should go depending on how other projects are in India.

I view waste to energy as a tremendous opportunity in India. As India transitions to a much more western style of living, where there is lot of packaging and the waste volumes are likely to go through the roof, companies that come with a solution to that waste are going to very well positioned. I see companies like waste management in the US emerging in India. Multibillion dollar companies that are going to take waste management on private contract in the same way as distribution companies have. I see this as an interesting long-term opportunity 3-4 years down the road. So we are very much on the lookout for companies that have that vision and are positioning themselves right now.

I also think agri-based investments and biofuels are very interesting. When we started out in 2004, we were very much focused on energy efficiency but we found it to be quite difficult because of delays due to bureaucracy in municipalities. But it is such a big opportunity in India that if somebody can crack the code then there is a lot out there.

Is solar viable from a PE stand point?

Not as a standalone solar plant but as part of a hybrid portfolio where you get a hydro asset like Bhilwara with a solar component. There is no doubt that costs (solar) are headed down. As a standalone project, it is going to give you 15-18% return which is what most PE funds expect. For somebody who has got a bigger play where they can put solar together and access the market I think that could be very interesting.

What is your assessment of the huge interest in water related investments?

Water is like waste. Anybody living in any city in India knows that this is the future. But the problem for water is same as problem for energy efficiency in dealing with municipalities. If you see most of the reform that has come in electricity, it has hardly come from Central government and I don’t see a similar initiative on water as yet. So while the opportunity is tremendous, I do not know when it is going to turn into a viable business model.

What remains the biggest challenge in investing in India?

The greatest challenge is always valuation. It’s like putting a price on a person’s shoulder. You can never put a price high enough.  Whenever an industry becomes very dynamic as clean energy is right now, a lot of new business models and opportunities would emerge.

Also, I think everybody has woken up to clean energy as an opportunity. Before the financial crisis, we were seeing all sorts of players - hedge funds, mutual funds.  We had investment banks getting into hydro companies and thinking that every company is a pre–IPO situation. But the problem with these players is that their interest in clean energy is linked to the fact that they take substantial exposure in infrastructure. These players getting in for quick-in-quick-out need to understand what the sector is and also develop an appreciation for the risk associated with it.

According to  a survey by New Energy World Network, over 90% of LP's prefer investing in ‘green’ PE and VC funds. What do you think and why?

I think a lot of investors in the PE fund tend to be macro first, where they see a good macro story and look for managers within that space who have got the access and track record to translate that macro theme into returns. Whether you view it from the point of high energy cost, whether you view it from carbon credit, or in the form of supportive regulation, clean energy returns are higher than conventional returns. But the after effects of financial crisis still exist, with a lot of LPs hesitant to do illiquid investments, and therefore we see a lot of hedge funds getting in here.

Will you stick to hydros as the main theme or also look to broaden your areas of focus?

We are actually looking to broaden away from hydro investments.  We are looking at some other themes  such as bio fuels and waste to energy. Those are probably going to be the flavours of 2014 – it’s a lot harder to find the right kind of team and execution abilities. We are looking to do four to five investments this year, with ticket sizes of $10 million-$15 million.

Any exits on radar?

We are looking to exit one of our hydros in Karnataka this year.